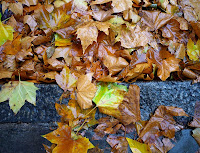 
We should reacquaint ourselves with falling leaves, and the sweet little melancholy annual death that is autumn. And by ‘we’, I really mean ‘me’. ‘Shall I not have intelligence with the earth?’ as Thoreau writes in Walden. ‘Am I not partly leaves and vegetable mould myself?’
Posted by Joe Moran at 14:44