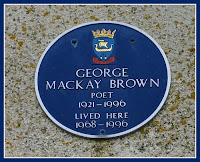 The word 'June' is beautiful, too, of course, but like May it has a curtness that lacks the lyricism of 'April'. In midsummer there is perhaps too much - what month-name devised by man could hope to contain the light and multitudinous beauties of the season? Best to be simple and brief, to hold the word to the nostrils like a plucked wild clover ... Such enchantment, under the light that never leaves the sky - not at midnight even.
Posted by Joe Moran at 18:54