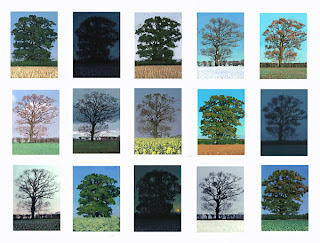 As the series progresses you see the tree losing and regaining its leaves, developing a film of snow and being populated by crows, and the colour of the surrounding field changing dramatically as the crops are rotated. Taylor started painting the oak in June 2003 – looking for a ‘still point of the turning world’ after the death of his parents and a close friend - and finished in August 2006, sitting in a crop of rape when the seed pods were a garish green.


Taylor’s oak is, he estimates, 250 years old. There is something about the sturdiness of the oak that appeals to the English imagination. Ironically, as Richard Mabey reminds us in his book Beechcombings, much of this dates back to the birth of scientific forestry in the late seventeenth century. In Sylva: A Discourse of Forest Trees, published in 1664 to encourage tree-planting to provide timber for the navy’s warships, John Evelyn was probably the first to use the phrase ‘hearts of oak,’ which David Garrick later reworked for his 1759 sea shanty, now the Royal Navy’s official marching tune: ‘Hearts of oak are our ships / Hearts of oak are our men.’


As he points out, Taylor was painting just a few miles from Constable Country. Interestingly, Constable gave his famous painting of a cart and horse standing in a millpond the title, ‘Noon’. It was someone else who named it ‘The Haywain’. Artists, aware of the changing light, are far more sensitive to the time of day than ordinary people are: Monet’s Rouen cathedral series, which Taylor’s oak series has echoes of, are meant to show it at different times of the day and year.


John Mollon, professor of neuroscience at the University of Cambridge, has described Taylor’s work as ‘parsing nature’. I wish I could notice the day as it passes as lovingly and perceptively as Taylor does in these paintings. My days hurry by in a homogeneous haze of fluorescent strip lighting and computer screen glow.
Posted by Joe Moran at 19:23