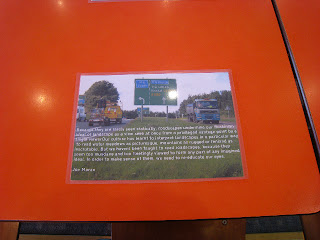 Classic literature is full of warnings about the the vanity of human wishes and the transience of life and fame. ‘Let fame, that all hunt after in their lives, Live register’d upon our brazen tombs, And then grace us in the disgrace of death,’ as Shakespeare writes in Love’s Labour’s Lost. The paths of glory lead but to the grave, and so on. As Macaulay wrote rather beautifully of the puritans: ‘Their palaces were houses not made with hands; their diadems crowns of glory which should never fade away.’

Mind you, that was before they discovered lamination. I wonder if Shelley would have felt differently about Ozymandias if he’d been immortalised in a non-biodegradable table mat. Which is all a roundabout way of saying that it was very nice of the photographer Edward Chell to send me some of the table mats from his recent photographic exhibition, ‘Gran Turismo’, at the Little Chef, Ings, on the A591 into Windermere, some of which incorporated quotes from On Roads. Chell has another solo exhibition, Viewing Stations, investigating the landscape of the motorway verge, in London in November. You can find out more here: http://www.edwardchell.com/. Chell is also co-editing a book, In The Company of Ghosts; the Poetics of the Motorway, to be published by erbacce-press next spring.

I note that, in his new memoir, Alan Partridge writes that one of the programme ideas he unsuccessfully pitched to the BBC, co-devised with Bill Oddie, was Motorway Rambles: walking the hard shoulders of British trunk roads with special permission from the Transport Police. Chell is one of several people – others include the vicar John Davies, who wrote a rather excellent book a few years ago about walking the M62 - demonstrating that this is not in fact a remotely Partridgesque activity but a worthwhile and enlightening one.

Mundane quote for the day: ‘The question should be, then, not how we break through the sludge of habit to rediscover the hidden strangeness of things, but how we ever managed to convince ourselves that anything was not a dissemination of intelligence. Boredom is the amazing achievement, not wonder. Our senses can catch only a narrow portion of the spectrum: the cosmic rays, rainbows above or below the range of visible light, or tectonic groans of the earth all elude us. What the moralists have said about the universe, science since Faraday has proved to be empirically true: We are immersed in a sea of intelligence that we cannot fully understand or even sense.’ – John Durham Peters
Posted by Joe Moran at 14:44