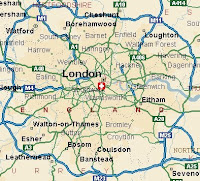 A slightly longer version of an article by me in Saturday's Guardian:

The M25 is 25 today. On 29 October 1986, Margaret Thatcher cut the ribbon across an eight-mile section of the London Orbital near Watford, the final and crucial bit that closed the circle. If there are any official commemorations of this anniversary, I have missed them; a birthday party for the most hated road in the country would perhaps not be well attended. Our antipathy to the M25 reveals much about shifting attitudes to roads over the last half century. In its thrilling early days, the motorway system was known by its epic cross-country routes (the M1 being called, with some fanfare, “the London-Yorkshire motorway”) but it is now the M25, mentioned daily on traffic reports as a vortex from which none can escape, that best sums up the public mood. The motorways that once carried hopes of uniting the nation now evoke images of eternal circularity, encapsulated in those mythical tales of foreign tourists (or, in some versions, confused pensioners or naïve northerners) who drive round the M25 for days in the mistaken belief that it is the M1.

But perhaps the anniversary should be celebrated, if only as a reminder of how distant the year 1986 now seems. For one thing, the M25 was opened by a prime minister prepared to attend a road opening and celebrate it as “a showpiece of British engineering skills, planning, design and construction”. In response to those who were arguing that the road was already congested, Thatcher said: “I can’t stand those who carp and criticise when they ought to be congratulating Britain on a magnificent achievement and beating the drum for Britain all over the world.” The M25’s popularity, she argued, was a sign of its success, and criticisms of it put her in mind of an old saying that “nobody shops at Sainsbury’s because of the queues”.

The prime minister was not alone in this attitude: the inauguration of the M25 was the last major road opening to generate real public excitement. The queues at both ends of the final section were much longer than usual because drivers were itching to be the first to complete an orbit. When the Guardian’s Terry Coleman drove along it shortly after the cones had been removed, he saw crowds waving from the bridges just as they had done when the M1 opened in 1959. His main complaint was that, at just three lanes, the M25 was not big or bold enough. It was also “absurdly too far out from the centre, which must be obvious even to those bicycling protectors of disused allotments, and the like who ensured by their protests that it should not be closer in”. The M25, Coleman argued, summed up “the mangy poverty of our present expectations”.

The completion of the M25 now seems to symbolise the high water mark of Thatcherism. It was accompanied by that mid-1980s phenomenon, a huge surge in house prices, all the way round its perimeter. Property prices in west Kent, in towns like Sidcup and Sevenoaks, rose by a quarter in 1986, exceptional even for the south-east equity bonanza of the period. The M25 also opened just two days after Big Bang, which ended restrictive practices in the City and ushered in a frantic era of takeovers and salary hikes. Some of these high-flying City traders quickly realised that the M25’s 117-mile circuit could serve as an illegal racetrack. They would meet up at a service station in the early hours of a weekend morning and race round the Orbital in their Porsches and Ferraris, the Dartford tunnel serving as an impromptu pitstop. The story of these Cannonball runs was uncovered by a young reporter for The Times, called Boris Johnson.

It all seems so eighties, a vanished world of red braces and mobile phones the size of bricks. But the M25 is still here and, even if nobody loves it, it hasn’t taught us much. The coalition government has made the same connection as Thatcher did between roads and entrepreneurialism, and recently declared an end to the “war on the motorist” by raising motorway speed limits. City traders no longer use the M25 as a racetrack, but the mood of braggadocio that inspired those midnight runs survives in certain quarters, undented by recent events. 1986 seems so long ago; and yet so little has changed.
Posted by Joe Moran at 18:11