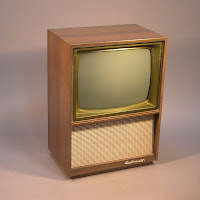 When I was in London working in archives recently, I stayed in a house in which the flatscreen, home cinema-style television was so hi-tech that I could not work out how to use it – in fact, I couldn’t even switch it on - so I ended up listening to a lot of radio 4 and watching Match of the Day live on iPlayer. It’s ironic, at least in the broadranging, Alanis Morissette sense of the word, that I am writing a book about television and do not know how to use the latest television receivers. But I don’t suppose I am alone in my ignorance: at the last count, I believe there were 28,000 people with black and white television licences. One of them is, or was, the former MP Chris Mullin, as his recently published memoirs reveal. Mullin was questioned by the Daily Telegraph, which revealed the scandal of MP’s expenses, about his £47 black-and-white TV licence. He had owned the set for more than 30 years, long before he entered Parliament. ‘The Telegraph reports that I claimed for a black-and-white TV licence, which has been the subject of much amusement among colleagues, many of whom dwell in the world of plasma screens’, he wrote at the height of the expenses scandal. After deciding to resign from parliament, he still could not resist composing a speech announcing his candicacy for Speaker of the House of Commons: ‘In passing I might deny any intention to install a black-and-white TV set in Speaker’s house.’

This reminds me of a bit in the late Gordon Burn’s book Best and Edwards: Football, Fame and Oblivion where George Best is marooned in his white-tiled modernist house in Bramhall: ‘The papers got very excited by the fact that he could lie in bed and open and close the curtains, dim the lights and open the garage doors at the flick of a switch. He could flick another switch and the television could disappear up the Scandinavian-style chimney … The remote for the gadgets went on the blink, with the TV yo-yo-ing up and down the chimney and the curtains opening and closing of their own volition …’

I am also reminded of an episode of the American sitcom Cheers in which the bar regular, Norm, is transfixed by a bank of big screen, satellite-linked TVs on the wall. ‘Well Normie,’ says his friend Cliff, ‘this is the information age. We can get up-to-the-minute stock prices, medical breakthroughs, political upheavals from all around the world. Of course, we’d have to turn off the cartoons first.’

Mundane quote for the day: ‘Arthur Koestler's satire of academic conferences, The Call Girls (1973), included an extreme leftwing French professor whose secret comfort was to lock his door and retire to bed to read The Three Musketeers while eating chocolate truffles. I sometimes thought of him when I indulged in my own curious vice, which was to watch Blind Date when working out on the rowing machine. This prototype for many far worse versions of humiliation television took my mind off the hamster-wheel boredom of static, indoor exercise. In fact its true awfulness and the glimpses of young macho-macha life in this country proved utterly gripping. The girls were often the crueller, when putting down their artificially selected partners, and it was hard not to feel sorry for the inarticulate and pathetically boastful young males. They could not see how things had changed and how they had become potentially redundant in the brave new world of mass communication to which they had exposed their own pitiful inadequacies.’ - Anthony Beevor
Posted by Joe Moran at 16:32