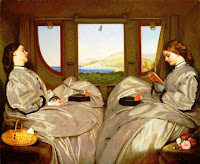 This piece by me was in the Guardian on Monday.

Whenever I travel on a Virgin train, I always book a seat in the Quiet Zone. I am not quite sure why, because the prominently displayed notices seem to have little impact on the use of mobile phones and other noisy devices. But the transport minister, Norman Baker, and a number of MPs representing suburban London constituencies now want to see these zones more widely applied, and have asked Transport for London to consider putting quiet carriages on the Tube and overground trains. They cite the American example of Boston’s commuter train lines, on which passengers are not allowed to use phones or talk loudly in the rush hour.

The train carriage has always brought people together in an awkward mix of tolerance and irritation. Its forerunner, the stagecoach, was a garrulous mini-community by comparison. In 1818, William Hazlitt remarked that “you will hear more good things on the outside of a stage-coach from London to Oxford, than if you were to pass a twelvemonth with the Undergraduates or Heads of Colleges of that famous university”. When the railway carriage arrived in the 1830s, its greater comfort encouraged musing and window gazing, and made solitary, silent activities like reading and sewing possible. By 1862, the Railway Traveller’s Handy Book was complaining: “Generally speaking, the occupants of a railway carriage perform the whole of the journey in silence … This is most unnatural and unreasonable … Why should an Englishman ever be like a ghost, in not speaking until he is spoken to?”

When the earliest, brick-like mobile phones appeared in the late 1980s, this etiquette began to change. What might have been seen only two decades ago as unBritish self-display – having an uninhibited conversation in public - is now grudgingly accepted, without some of us ever quite getting used to it. It is not just that train passengers disagree about the nature and value of silence, but that mobile phones occupy the user and repulse strangers more comprehensively than books or newspapers. In doing so they have subtly altered the already fragile social dynamic of the train carriage, making us seem ever more absent to each other. In A Book of Silence, the author Sara Maitland argues that our ambivalence about silence stems from two conflicting contemporary ideas: first, “that we feel ourselves to be happy and fulfilled only when we are interacting with other people”, and second, “the equally popular mythology that stresses individual autonomy and personal ‘rights’.” Some of the occupants of a train carriage want to be left alone to get on with work; for others, such “work” involves noisily conversing with other people.

The expectation that other people should be silent seems to be an arbitrary, changeable affair. Actors increasingly complain of mobile phones putting them off in mid-soliloquy, but theatre audiences were not always expected to be quiet. In his recent history of celebrity, Fred Inglis traces this convention of sitting in reverential silence back to the actor-manager David Garrick, who in the mid-eighteenth century “taught the London audiences, bit by bit, to suppress their chatter, their zoo noises and bursts of ribald song, their bombardments of fruit onto the stage”. Perhaps today’s noisier theatregoers are simply returning to a pre-modern, natural state. Maitland sees the interruption of silence as an artificial affliction of modernity, but I am not so sure. Certain environments have certainly become noisier: libraries now seem actively to encourage conversation and clatter. But many things are quieter than they used to be: you no longer hear the incessant hammering of the typing pool, and today’s warehouses and factories are places of cathedral-like calm compared to a generation ago.

I share Maitland’s love of silence, although not enough to challenge anyone disturbing me in a quiet zone. But I cannot decide if the desire for it is natural or unnatural in our herd-loving, compulsively communicative race. When I was a student, I happily wrote essays in crowded common rooms; now I cannot write if there is so much as a creaky floorboard in the room above me. It is amazing how much noise you can get used to, and then how much silence you can become accustomed to demanding. So I am not surprised that the quiet zone of a train carriage is such an area of conflict: for I am never so estranged from my fellow citizens as when, in the middle of their never-ending noise, I feel the need for silence.
Posted by Joe Moran at 21:52