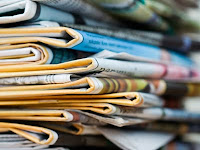 'Who want’s yesterday’s papers? Nobody in the world’, sang the Rolling Stones. Well, actually, the British Library is beginning to digitise millions of pages of old newspapers held at the newspaper library at Colindale and making them available online from this summer onwards. At present they are just nineteenth century newspapers but they want to make more recent ones available, although James Murdoch isn’t very happy about that. As a cultural historian dealing with the history of ephemera I spend a lot of time reading old newspapers, and am very familiar with the journey up the northern line to Colindale, with its special atmosphere honed out of the feel and smell of crumbling old paper and ink and the sound of frantic spooling through hundreds of pages of the Orkney Herald in the Microfilm room. There is something slightly subversive about perusing old newspapers because they are not meant to be read after their sell-by date. The French word ‘journal’ sums it up: a newspaper is ‘of the day’. ‘Quotidien’ also appears a lot on newspaper mastheads in France – a word that literally means to mark time. And the Greek word for newspaper, I learnt from a recent article by Graham Swift in the Guardian, is ephemeritha. Like the ephemeron fly, the newspaper is meant to die on the day it is born.

In his new book, Paraphernalia, the academic and cultural critic Steven Connor – whom I have quoted from before on these pages - writes that ‘newspapers are an emblem of the impermanence of writing, the subordination of writing to time. Time pulps the differentiality of newspapers – pro-government, anti-government, Establishment, sporting, samizdat, quality, tabloid – into pure indifference.’ Connor offers an intriguing aside on the history of using newspaper for bottom-wiping. He notes that the first proprietary lavatory paper in the mid-nineteenth century ‘made much of fact that printer’s ink in newspapers, along with traces of vitriol, lime and potash, was likely to cause or aggravate piles’.

Looking through old newspapers is a slightly melancholic activity. It has given me a particular perspective, a certain scepticism about collective manias and gadarene thinking, because there always seems to be another piece of groupthink along in a minute. You realise there is nothing new under the sun, almost everything is quickly erased from collective memory and lots of even quite famous people – TV presenters, writers, politicians, columnists - are forgotten as though they had never been. All that hot air you see on the newspaper comment sites: it will disappear like smoke. And even if is archived by the British Library, the chances are that no one will read it ever again.

Mundane quote for the day: ‘The newspaper, incapable of seizing the insignificance of the everyday, is only able to render its value apprehensible by declaring it sensational. Incapable of following the movement of the everyday insofar as it is inapparent, the newspaper seizes upon it in the dramatic form of a trial.’ – Maurice Blanchot
Posted by Joe Moran at 11:24