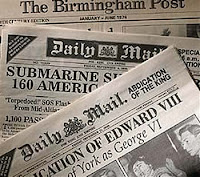 I have blogged before about Not Many Dead, the column in the Oldie magazine which demonstrates conclusively that much of what finds its way into our newspapers is not in fact news at all but entirely banal and inconsequential. Since then, just for my own amusement, I’ve been collating some more examples of these non-news stories. They are not difficult to find. Most of the stories below are taken just from the last few days.

It should have been the headlines viewers were focusing on but last night all eyes were actually on newsreader Fiona Bruce’s glasses. The 47-year-old was sporting a new pair of spectacles as she read the 6pm bulletin on BBC1. Miss Bruce usually wears contact lenses when she is presenting programming but occasionally wears glasses to rest her eyes. But yesterday she was forced to wear them because she has a small eye infection, preventing her from wearing lenses or any make-up around her eyes. – Daily Mail

The prime minister has told the BBC that Larry the cat has caught three mice since he moved into Number 10. The four-year-old tabby was recruited in February after a rat was spotted in Downing Street. Speaking to Radio 2's Steve Wright, David Cameron said he was ‘a good mouser’ and was ‘doing well’. - BBC News website

Nicholas Cole, owner of the Scent with Love florists discovered a duck in residence in one of the hanging baskets outside his shop on Greevegate on Thursday morning. Since then, five eggs have been laid in the basket and there could be many more. - Lynn News

Emma Watson may be the new face of beauty and skincare giant Lancome and hailed as the ‘icon of her generation’. But the actress showed she wasn’t immune to the irritations faced by most other 20-year-olds. The star suffered an untimely break-out of spots only a few days after it was announced that she is taking over from Julia Roberts as the face of Lancome. – Daily Mail

A waxwork of former England and Newcastle United striker Alan Shearer has been unveiled. The figure, which took four months to make, is on show at Madame Tussauds in Blackpool. Shearer’s figure will stand in the ‘locker room’ with models of David Beckham and Wayne Rooney … Experts assessed Shearer’s hair, eyes and skin colour, studied pictures and watched videos to get to know a little bit more about his character. – BBC News website

‘I have been targeted by a very tiresome bloggerist who keeps altering my biog on wikipedia,’ tweets Tory MP Jacob Rees-Mogg. ‘My wife is not called Sue, we did not meet in the frozen fish section of Cheam Sainsburys and I have never owned a lettuce farm.’ – Telegraph blogs
Posted by Joe Moran at 20:00