The man in the bowler hat 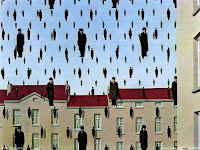 Before this blog started talking about the everyday, the avant-garde got there first. Surrealism and Dada juxtaposed random elements of daily life in the hope of making surprising connections, taking their inspiration from the Comte de Lautréamont’s The Songs of Maldorer (1869): ‘As beautiful as the chance encounter of an umbrella and a sewing machine on a dissecting table.’ They produced collages out of the ordinary scraps of urban life such as bus tickets, torn newspapers, bits of clothing and bottle-tops; transposed commonplace objects such as bowler hats or pipes into unfamiliar surroundings; read aloud from the telephone directory; and created poems by cutting out and reassembling words from newspapers, a practice continued today in the magnetic poetry that adorns a million kitchen surfaces.

I have just got back from the Magritte exhibition at the Liverpool Tate. One of the paintings on display I have always loved: that rainfall of bowler hatted commuters otherwise known as Golconda. In his book, The Man in the Bowler Hat: His History and Iconography, Fred Miller Robinson reveals that the bowler hat has not always served as a synecdoche for the respectable commuter. In the nineteenth century, the bowler was ‘the male (and sometimes female) headgear of motion and mobility, unfixed as to region, occupation, class, or gender. It was as fashionable among costermongers as among gentry, among cabdrivers as among bankers.’

The shift seems to have come in the first half of the last century, when Magritte was producing his series of bowler hatted themed paintings. W.H. Auden and Louis MacNeice refer in Letters from Iceland to ‘the bowler hat who straphangs in the tube’. And in a chapter of his 1946 book The English Way, titled ‘Class Feeling and Bowler Hats’, Pierre Maillaud reflects on Sean O’Faolain’s remark that ‘between England and Revolution there will always stand an army of bowler hats’. After the Second World War, Miller Robinson writes, the bowler was worn almost exclusively by men in the City of London, or by London men who wished others to think they were in banking or trade ‘at the heart of things British’.

In the surprisingly late date of 1962, Anthony Sampson wrote that in the inner square of the city nearly everyone still wore a dark suit and bowler and carried an umbrella. ‘Every lunch time, the taxis and government Humbers draw up outside the palazzi of Pall Mall, and bowlers and umbrellas disappear through the great stone doorways, acknowledged by reverent porters,’ he writes about London clubland. ‘Through the big windows you see men reading The Times, hailing each other, exchanging surreptitious conversation with special clubman’s gestures – the pat on the shoulder, the grip on the forearm, the steering from the back.’

In my lifetime, the bowler hat hardened into cliché in the form of comedy sketches and adverts for the Bradford and Bingley building society. Perhaps bankers could try wearing them again to adopt an air of patrician respectability. Or maybe it is too late for that.

Despite my interest in bowler hats, I managed to resist the temptation to buy the bowler hat ceiling light in the Liverpool Tate gift shop, priced at £175.

Mundane quote for the day: ‘Hancock’s moroseness was the very content of his humour – a humour based on the boredom and exasperation of a man who hated being ordinary. Sellers’ characters, intead of slumping and moaning, yawning and grunting, to get laughs, are in hyper-manic flight from the mundane.’ – Roger Lewis, The Life and Death of Peter Sellers
Posted by Joe Moran at 21:17