The hiss of summer lawns 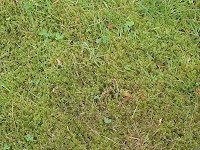 A slightly longer version of a piece I did for today’s Guardian about lawns:

At the Hay Festival last week, the Gardeners’ World presenter, Carol Klein, laid into lawns, calling them “monocultures”. Klein’s is one of several recent voices to suggest that, with climate change and greater awareness of the need to save water, we may be witnessing the slow death of the British lawn. Contemplating a future of dry springs and hosepipe bans, the nation’s gardeners may wonder if, as happened during the great drought of 1976, the brown lawn will soon be seen as the sign of the true patriot.

The ecological argument against lawns has only compounded their growing unfashionability over the last few decades. Once status symbols found mainly in royal estates and university quads, they became signifiers of suffocating suburban respectability. A survey by the London Wildlife Trust this week found that lawn area in London decreased by 11% between 1998 and 2006 as homeowners replaced grass with garden sheds and paving. In gardening fashion, the rectangle of grass surrounded by rosebeds has given way to more sinuous shapes and varied planting. Meanwhile the nature writers currently enjoying a resurgence in the non-fiction lists have tended to stress the value of non-human wildness and weeds, not the human-enforced, geometric neatness of lawns. And it is true that the environmental case against lawns is unanswerable. They are the most artificial of natural landscapes, using up copious amounts of water and chemicals for the benefit of a few species of grass at the expense of all other living things, from earthworms to daisies.

And yet I would be sorry to see the end of the lawn. Like the new nature writers, I appreciate the value of wildness, but I also value the capacity of people to impose shape and meaning on the world, however meaningless this might seem to those looking in from the outside. The poetry of lawnmowing, a surprisingly capacious subgenre of English literature running from Louis MacNeice to Andrew Motion, usually hones in on the touching futility of the ritual. The great lyricist of mowing the lawn is Philip Larkin, who mentions it throughout his poems and letters. “Have bought a new lawnmower ready for the spring offensive,” he wrote to a friend in 1981. “Must get the flame-thrower serviced, and invest in a few gallon drums of Weedol.” Larkin, it will be noted, was not afflicted with our modern anxiety about interfering with fragile ecosystems; for him, tending the lawn was biological warfare. And yet in his poem “The Mower”, he wrote movingly about accidentally killing a hedgehog with his rotary blades one June day in 1979.

Like many gardeners, Larkin moaned constantly about having to cut the grass, but never questioned the fact that he had to do it, in the same way that he complained about the tedium of library committee meetings while diligently chairing them and collecting the minutes. His ambivalent attitude to lawnmowing finds an echo in his poetry, which often suggests that everything is ephemeral and nothing ultimately means anything, but that in our fragile social conventions we find a respite from this knowledge.

Anyone who talks to a gardener with a carefully trimmed lawn will know that lawn care is a rich subculture full of social expectation and shared knowledge, from the relative merits of cylinder and rotary mowers to the dangers of close cropping. Like a lot of things in life in which we invest our physical and emotional labour, keeping a lawn tidy is ultimately pointless. The grass carries on growing, and the lawnmower eventually packs up, followed by its owner. If you want a vivid illustration of this, you can find Larkin’s rusty, grass-coated Victa Powerplus lawnmower (not, happily, the one that did for the hedgehog) in the Hull University library archive.

I work in an office that overlooks a large stretch of lawn. Every Monday morning a man comes to mow it. No one notices him, or the lawn, and I wonder if he ever reflects on the endlessness and thanklessness of his task. I barely notice him either, except to mutter under my breath about the noise from his strimmer while I am trying to work. But I do love the smell of newly mown grass in what Larkin called “the white hours of young-leafed June”, and would not want to see a nation carpeted in artificial turf. So when he comes next Monday, I’m going to go down and thank that man - for mowing the lawn.
Posted by Joe Moran at 13:17