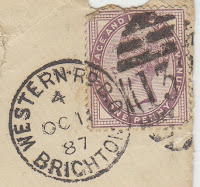 The power of the address in defining modern identity is brilliantly conveyed in the artist Tom Phillips’s ongoing work A Quest for Identity (1974-), a series of collages of envelope fronts from letters, bills and junk mail addressed or mis-addressed to Phillips’s various homes.

In recent years, the power of the address has been compounded by the addition of the postcode. Postcodes were once simply alphanumeric devices to help with the mechanical sorting of mail, assigned using an arbitrary combination of geographical location, alphabetical order and sorting office pragmatism. When the Royal Mail introduced the postcode system throughout Britain between 1959 and 1974, the well-to-do did not like having postcodes at all, in the same way that they traditionally preferred to have house names rather than numbers. As Nancy Mitford advised them in Noblesse Oblige (1956), the ideal upper-class address was simply a place-name, a describer and a county: ‘Shirwell Hall, Salop’.

It was the pioneering gentrifiers of the 1960s, doing up rundown Georgian terraces on the wild north London frontier, who first saw the power of the postcode as a way of marking upward mobility. Not for nothing was Alan Bennett’s 1966 TV satire about Camden’s media darlings called ‘Life and Times in NW1’, a title later borrowed by Mark Boxer for his Listener cartoon strip. In Soft City (1974), Jonathan Raban noted that London postcodes were becoming like talismans, ‘endowed with curiously absolutist values’ and ‘magical guarantees of a certain kind of identity’. In more recent years, the snob value of postcodes has increased as they are now a crucial piece of actuarial shorthand, used at no cost to themselves by banks, insurers and retailers to classify potential customers and target services.

Postcodes are ambiguous not just because they arbitrarily overlap the more natural divisions of districts and neighbourhoods, but because they are interpreted crudely. Most estate agents and housebuyers concentrate on the outward code (the first part, which denotes the general area) and ignore the inward code (the second part, separated by a space, which pinpoints the specific street). The latter code would be a much more accurate indicator of class and status in the complex demography of London neighbourhoods.

Mundane quote for the day: ‘Any idiot can face a crisis; it is this day to day living that wears you out.’ – Anton Chekhov
Posted by Joe Moran at 20:30