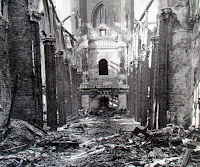 In a postscript to her classic The Pleasure of Ruins (1953), Rose Macaulay compared the appeal of the ‘catastrophic tipsy chaos’ of postwar British bombsites with the ‘morbid pleasure in decay’ that the Romantic poets and painters experienced among the wrecked remains of Gothic abbeys and Greek temples.

In Christopher Woodward’s book In Ruins, I found an interesting discussion of churches bombed in the Second World War. During the blitz the art historian Kenneth Clark declared that ‘Bomb damage is in itself Picturesque’. On 15 August 1944 Clark and others, including T.S. Eliot and John Maynard Keynes, proposed that some bombed churches should be preserved in ruins, to remind future generations of ‘the sacrifice on which [their] apparent security has been built’. The campaign was elaborated in a book, Bombed Churches as War Memorials, which, Woodward writes, was ‘the last great fling of the British Picturesque, summoning the spirit of Stourheard and Stowe to soothe the trauma of high-explosive bombs. These churches would not be cold, black slag-heaps of unforgiving bitterness, as at Dresden, but garden ruins haunted by birds and soft with greenery, places that children would be thrilled to explore. Stone colonnades truncated by the blast would continue as rows of trees, and roofless crypts become sunken, sheltered gardens.’

We have our own bombed-out church here, St Luke’s, about two minutes walk from where I work, which has been a hollow shell ever since the Liverpool Blitz exactly seventy years ago. Strangely enough, I discovered recently that this church is following me on Twitter. You can follow its own tweets, should you so be inclined, at @BombedOutChurch.

There are plenty more contemporary ruins in the area where I work, which has now been rebranded the ‘creative quarter’. The patchiness of Liverpool’s recent redevelopment allows for spaces within the city where accidental survivals from the recent past are visible. Even in the centre of the city, where real estate should be most prized, there are no man’s lands blocked off with corrugated iron or wooden hoardings, and unoccupied buildings with peeling paint, shattered brickwork and rotting timber. In the sidestreets off the main shopping areas, the less visually appealing effects of regeneration are evident: masses of rubble, wire fencing and cones, and the fronts of buildings unceremoniously ripped apart. The passer-by can look inside these buildings in cross-section at the remains of ordinary lives, such as wallpaper peeling from walls, staircases ending in thin air, and the holes left by fireplaces. As Stephen Barber writes, the contemporary idea of cities as supermodern environments paradoxically opens them up to history and memory, as ‘the visual arena of the city … move[s] through concurrent acts of construction and obliteration, extrusion and intrusion, incorporation and exclusion’. This process produces historical remains which cannot be recuperated by official forms of heritage and nostalgia, but instead expose what Barber calls the city’s ‘burning core of banality’.

There are some wonderful descriptions of bomb damage in Daniel Swift’s recent book Bomber County, including a brilliant account of Virginia Woolf seeing her old flat in Tavistock Square exposed to the elements.

Mundane quote for the day: ‘Strange things happen on the edges of places, where two opposed landscapes meet to create a mutant zone, lacking organic consistency. English suburbia typifies this strangeness, endlessly seeking new ways to feel at home with itself while engendering contradiction and compromise. The suburbs, because of their presumed orthodoxy, exaggerate the extremities of mood and movement; the darkest alley in the seediest district of the biggest city will lack the sheer oddness of suburban neatness, where all that appears most settled conspires to make its own drama … English suburbia has become virtually synonymous with the sinister and the sad – the very opposites of its founding intentions.’ – Michael Bracewell, England is Mine
Posted by Joe Moran at 12:06 6 comments: 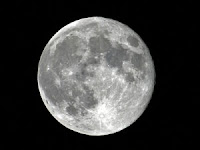 Mundane quote for the day: ‘Wall! I wonder that you haven’t fallen down in ruin, when you have to support all the boredom of your inscribers.’ Graffiti in ancient Pompeii, from Peter Toohey, Boredom: A Lively History
Posted by Joe Moran at 15:18 1 comment: 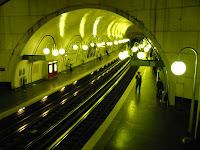 The fundamental quality of the métro is its ordered and contractual nature, which is found not simply in its explicit rules (the ban on smoking, for example, or the regulation of travel through ticket types) but also in its ‘collective morality’, the complex etiquette necessitated by its cramped and warren-like environments. Although it is true that certain people remain indifferent to these rules, Augé write that what is ‘most astonishing is that there are not more of them’.
Posted by Joe Moran at 10:34 5 comments: