A sad heart at the supermarket 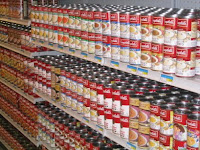 Every day on my drive to and from work through Toxteth I can see a new Tesco’s rising up out of the ground like a recession-eating behemoth. At first it was just a hole in the ground; then it was a prefab shell with access roads. Now the lights are on and you can see it taking shape inside: the long row of checkouts, the head-high gondolas, the massive overhead signs: bread, wine, meat, fish … Everything except the shoppers, in fact, and stuff for them to buy.

The first supermarket in Britain opened on 26 June 1950, when Sainsbury’s opened a newly refurbished store on London Road, Croydon. The London Co-operative Society had already opened some self-service stores, but the Croydon Sainsbury’s was big, over 3,300 square feet in area: the precursor of the modern supermarket. Not all the customers were happy. Alan Sainsbury himself gave one woman a new-fangled wire basket to collect her groceries, and she flung it back at him in disgust.

In those days of strict government controls, the Ministry of Food had given Sainsbury’s special dispensation to convert the store to self-service. The government saw the importation of this American retail method as a way of coping with labour shortages and cutting costs. The US Technical Assistance and Productivity Programme established under the Marshall Plan promoted “the gospel of self-service”. The abolition of rationing in 1954, and the ending of postwar building restrictions in the same year, led to the proliferation of supermarkets. At first many housewives were sceptical about this new form of shopping, worried about the loss of personal service, the temptation to overspend and even being accused of stealing goods bought in other shops. Drawing on memories of rationing, self-service advocates reassured them with the promise of queueless shopping: they would only have to queue to pay, with no time-consuming weighing and wrapping of food, and those requiring few items could pay for them quickly, while others could shop at their leisure. One upbeat article in The Times in 1959 claimed that self-service “saves thousands of hours of queueing time every day,” and that even a queue was now only “a queue in one store as opposed to queues in four or five shops”. This optimism proved to be premature. By 1964, the Consumer Council was reporting that the most common complaint of supermarket shoppers was the length of queues at the checkouts.

No amount of empathy for the corner shop, or suspicion of the supermarket as a super predator in the food chain, seems to be able to halt the spread of the Tescopoly. The supermarket is a place where, in Jean Baudrillard’s words, “all life is massaged, climate controlled and domesticated into the simple activity of perpetual shopping.”