Writing in the margin 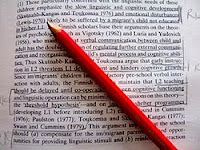 I hesitate to post this piece that appeared in yesterday’s Guardian, because the first paragraph seems to have made some people angry, and some of them even think I should be prosecuted. If it helps, which it probably doesn’t, I was referring to books I have borrowed from my own university’s library, not from public libraries, and I was trying to be wry, flippant, ironic etc. It’s rather sobering to generate such anger. ‘All's wrong that ever I've done or said, And nought to help it in this dull head,’ as I think it goes … Anyway, while I await the constabulary’s hand on my shoulder, and since I can’t make things much worse, here it is.

As anyone who knows me will confirm, I am almost neurotically law abiding. But there is one area of life where I remain an outlaw, beyond the pale, a fugitive from justice. I only do it in pencil, and sometimes I remember to rub it out, but … I write in library books. Those spaces down the sides of the page just seem so inviting, the impulse to anoint them with scribbles is irresistible. History is on my side: until the nineteenth century, books were often used as scrap paper and few people had qualms about scrawling on a pristine book. No jury in the land would convict me. Books are meant to be written on.

Is such annotation a dying art in our online era? Most ebook readers allow you to highlight text and take notes, but there isn’t the same visual aesthetic of columns of alluring white space tempting you to fill them with your thoughts. On the other hand, the web has whetted our appetite for sharing reading experiences. Amazon has just introduced a Public Notes facility to the Kindle, which posts your marginalia online so other people can read it. Social reading websites like BookGlutton, where you can attach notes for other readers of the same book, have been around for a while.

You could argue that this impulse is really a return to the great age of marginalia, which the literary scholar H.J. Jackson identifies as lasting from about 1750 to 1820. The practice then was widespread and communal. Samuel Taylor Coleridge, who coined the word “marginalia”, published his own examples and wrote with a readership in mind. “You will not mind my having spoiled a book in order to leave a Relic,” he wrote, a little smugly, in one of Charles Lamb’s books. Many of today’s social networking sites similarly create a kind of ongoing collective commentary, not just on books but on the world in general.

And yet for me there is something missing from this electronic marginalia. First, it seems so ephemeral. Pencil marks left on a page will last several lifetimes, perhaps as long as the paper itself. Public Notes on the Kindle are less tangible and, even if someone is archiving them, are likely to be unreadable in the future because of changes to hardware or software. The most basic motive for writing marginalia is surely to create a sense of ownership: children often write their names over and over again in books. You can’t do that with a Kindle.

Second, this public notetaking seems too much like a performance. Marginalia over the last two centuries, perhaps as attitudes towards defacing books have become more disapproving, has been semi-private, almost furtive, a silent communion with the author or the unknown reader who might pick up the book second-hand a generation later. Marginalia is, by definition, something on the margins, undervalued, overlooked.

Such textual detritus is currently a voguish topic in academic literary studies. The Reading Experience Database at the Open University, for example, aims to map all evidence of recorded engagement with texts from 1450 to 1945: everything, from marginalia to commonplace books, that might show that ordinary people actually read books rather than simply using them to furnish a room. This kind of evidence is surprisingly sparse and often resoundingly banal. Many readers just wrote dictionary definitions in the margin, or “v. good”, or they simply underlined words. And yet this sub-Coleridgian commentary can also be rather touching, evidence of an earnest wrestling with meaning and thirst for knowledge. True marginalia is an end in itself, a brave attempt to bridge the ultimately impassable gulf between writer and reader.

And because marginalia is unguarded, meant only as an aide-memoire or for a select group of readers, it can accidentally reveal much about the person writing it. Recent releases from the National Archives disclose that Margaret Thatcher wrote words like “No!” and “This will not do” in the margins of draft documents. Now, I suppose it would have been more newsworthy if it had emerged that she constantly sprinkled the margins with encouraging words and smiley faces. But you can’t deny that Mrs Thatcher’s marginalia sums her up perfectly.
Posted by Joe Moran at 17:27