A history of the world in 1 object 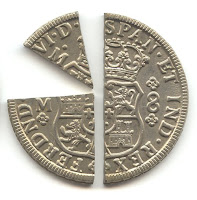 I found this quote in Neil MacGregor’s A History of the World in 100 Objects, which I share with you just in case you’re one of the 23 people in Britain who didn’t get it as a Christmas present. It’s about the famous Spanish coin ‘pieces of eight’, the first truly global currency, which was produced in the 1570s and had spread across the world by the end of the century. Unfortunately this caused rampant inflation in Spain and a shortage of silver as it all went to pay for foreign goods and the upkeep of Empire. There was a lot of discussion among Spaniards about how their riches seemed more apparent than real. This is an unnamed writer in 1600 on the groupthink of speculation and the often illusory nature of wealth:

The cause of the ruin of Spain is that riches ride on the wind, and have always so ridden in the form of contract deeds, of bills of exchange, of silver and gold, instead of goods that bear fruit and which, because of their greater worth, attract to themselves riches from foreign parts, and so our inhabitants are ruined. We therefore see that the reason for the lack of gold and silver money in Spain is that there is too much of it and Spain is poor because she is rich.

Oh dear. We really haven’t learnt very much in the last 411 years have we?

Mundane quote for the day: 'Money is one of those human creations that make concrete a sensation, in this case the sensation of wanting, as a clock does the sensation of passing time.' – James Buchan