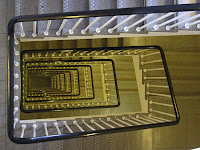 Mundane quote for the day:
I see them in foul dug-outs, gnawed by rats,
And in the ruined trenches, lashed with rain,
Dreaming of things they did with balls and bats,
And mocked by hopeless longing to regain
Bank-holidays, and picture shows, and spats,
And going to the office in the train.
- Siegfried Sassoon, ‘Dreamers’
Posted by Joe Moran at 18:54