The outlook is bleak 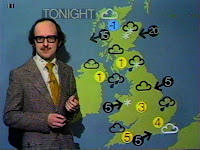 It’s odd how attached we get to the weather forecast, that little extempore lecture to the nation, that consoling quotidian ritual that comes after the news. There has been a forecast on the BBC almost every day since 26 March 1923. The exception was during the Second World War, when the radio forecast was suspended in case it was helpful to the enemy, although the government partially relented in October 1944, allowing information to be given about the weather the day before yesterday. ‘Most people,’ the BBC bulletin stated laconically on the day the ban was lifted, ‘will have cause to remember it because in most parts of the country it just rained and rained.’ ‘Weather forecasts are a welcome return,’ wrote a Mass Observation diarist when the weather forecasts returned properly in 1945, ‘and we don’t care how many deep depressions threaten from Iceland or anywhere.’

Emine Saner from the Guardian contacted me on Thursday with the dismaying news that three of the BBC’s weather presenters are to be culled in a cost-cutting exercise. I was happy to express my admiration for one of the threatened presenters, Rob McElwee:

The journalist Brian Cathcart, author of an excellent short book about rain, recently tweeted that McElwee’s weather forecasts were ‘prose-poems’. It’s true, they are - and they also tell you what the weather’s going to be like, which is not as common as you might think.

This little efficiency drive is all, of course, just an amuse-bouche for the gargantuan main course of Wednesday’s announcement of the spending review results, which will I suspect feel similarly arbitary and illogical.

Mundane quote for the day: ‘If news and sports are of the same stuff and texture, then the weather report plays a literally pivotal role in the inversion and return from tragical or serious impressions of everyday events to their comical or farcical identities …

The programmers appeal to the archaic side of the divining arts in order to produce a timeless climate of myth … the myths which structure the manifold allegories also fabricate the news which frames the weather. In this fashion the meteorologist gives credence to catastrophe by forcing news to be subject to daily rhythms seemingly more timeless than the present currents of international events. He underscores their potentiality by folding them into patterns of the everyday, allowing us therefore to conclude that a balanced meditation on death (the news) and life (the weather) will allow anything to pass through the interstice of history and myth …

A most extraordinary and most everyday production of le quotidien, then, is the weather. It establishes a split between news just passed and future events and allows the occasion, in the time of the climate, for a fake presence to body forth through the report.’ – Tom Conley
Posted by Joe Moran at 15:49