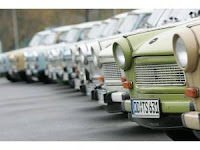 One of the memorable sights of the weekend of 11 and 12 November 1989, after the Berlin Wall came down, was the endless stream of mustard yellow Trabant P601s, or ‘Trabis’, trundling through the checkpoints from East to West. Jubilant onlookers celebrated with the Trabiklopfen, an energetic thump on the car’s roof.

During the Cold War, while Mercedes, Audi and Volkswagen spearheaded West German economic success, the Trabi was the command economy on wheels. Nicknamed ‘the cardboard car’, it was made from Duroplast, an unrecyclable resin strengthened by Soviet cotton wool waste and compressed brown paper. Its two-stroke engine burned a petrol and oil mix producing ten times as much pollution as Western cars, although the accelerator pedal did have a point of resistance halfway down to discourage excessive fuel consumption.

The Trabi remained in production, virtually unchanged, for a quarter of a century. It was produced as either a ‘limousine’ or ‘estate’ car, in ‘standard,’ ‘special request’ and ‘de luxe’ versions, the latter having such exciting additional features as a different-coloured roof, chromium-plated bumpers and headrests. There was also a convertible Trabi with the trendy name, ‘Tramp’, a civilian version of the GDR army jeep.

After reunification, the East German market was flooded with used Western cars and the Trabant factory in Zwickau quickly went bust. East Germans, who had been on 10-year waiting lists for Trabis, now abandoned them in the street or exchanged them for more valuable currency like Western cigarettes.

But the process of kitsch recuperation soon began. Street artists made makeshift sculptures from these abandoned cars, and smart café bars recycled Trabi parts as furniture. Today, Berlin shops sell Trabi T-shirts, key-rings and die-cast models, and modish young people drive Trabis with jazzy paint jobs and souped-up engines. Tourists can go on a ‘Wild East Trabi Safari’ tour. You drive around East Berlin in a Trabi convoy, with a tour guide in the lead car providing a radio commentary, and at the end receive your ‘Trabi driving licence’. Trabi chic is part of the vogue for ostalgie, a tongue-in-cheek nostalgia for the old GDR which sees its pretensions to state-of-the-art modernity as endearingly dated. We can view the primitive rustbuckets of the past with a mixture of comedy and sentiment, safe in the knowledge that we will never have to drive the things.
Posted by Joe Moran at 18:37