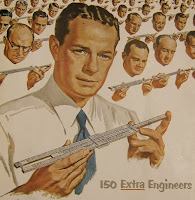 Indeed, I can foresee a renaissance for these objects for the same reason that knitting and embroidery are again in vogue. People are embracing the texture and solidity of material things as a rearguard action against the growing touchlessness of the world, the tendency for our jobs to become an endless cycle of virtual exercises, an eternal exchange of emails and other digital surrogates. Not all of us know how to knit, but we can all buy something from the “back to school” displays, whether we are going back to school or not. We can sharpen our pencils, open a crisp new exercise book and create the world anew. Once a year, at least, we can imagine ourselves as noble artisans, transforming our little part of the universe with ink, graphite and paper. What we need, in these uncertain times, is some pencil case therapy.
Mundane quote for the day: ‘The miner finds understandable pleasure in sending his pigeons winging afar off through the blue to distance places. There is Viking blood in English veins, so to me it is a pathetic sight to see those grown men sailing model boats on the Round Pond in Kensington Gardens on a Sunday morning. Once we were a nation of sailors, not – as we are today – of civil servants. Their blood is the bacteria-free plasma from the cold deep-freeze stores in Whitehall.’ - Gilbert Harding, Master of None (1958)
Posted by Joe Moran at 15:22