The road to Eden 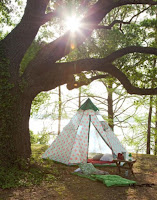 Every year I like to ‘get back to the garden’ by spending a weekend at the Shrewsbury folk festival, which I've just got back from. Granted, I only camp out for one night and someone else kindly puts up the tent for me. But still I like to venture out at first light along with the other alpha male hunter-gatherers and go foraging at every corner of the campsite for the last copy of the Observer. We return to our caves triumphant only to find that we have earned the displeasure of the womenfolk by buying 4 copies of the same newspaper.

These thoughts about getting it together in the country have also been prompted by my reading of Rob Young’s excellent new book, Electric Eden, which is partly a twentieth-century history of folk music and partly an exploration of the idea of an English rural idyll. It begins with the unforgettable account of the long-forgotten – then remembered again through a mobile phone advert – folk singer Vashti Bunyan, who in 1968 set off on an 18 month trek along Albion’s roads, in a gypsy cart pulled by her horse Bess, heading for the remote Hebridean island of Berneray.

This chapter includes this eloquent summary of the anti-mythology of the British road:

‘The land mass of the British Isles is not large enough to have generated a culture of the open road. Leaving aside such one-off terrace chants as Tom Robinson’s “2-4-6-8 Motorway”, the culture of British travel is more commonly linked to the sense of a quest, a journey undertaken for purposes of knowledge or self-restoration. In that sense, the British road is a road to the interior, of the imagination rather than a physical coverage of distance. Its poetic energy is supplied by lanes, forest spurs and hillside tracks, not motorways and slip roads.’

Young also reveals that the Beatles song ‘The long and winding road’ was inspired by Paul McCartney’s purchase of a country retreat on the Mull of Kintyre. It is ‘the B842 from Kintyre to Campbeltown rendered in treacle’.