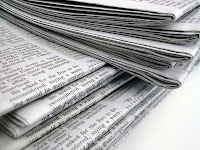 If only Charles Baudelaire, the author of today’s mundane quote, had lived into the 21st century, he would have been shocked by the capacity of modern news to regurgitate the self-evidently non-newsworthy, from the survey that reveals the bleeding obvious to banal details about the lives of the famous. Nick Davies has called this sort of thing “churnalism”.

Here are some of my favourite entries from Not Many Dead, an anthology of non-news stories from British newspapers collected by the Oldie magazine:

Television entertainer Ruby Wax wrote the landlord of a pub near Bath an IOU for £3.15 after finding herself short of cash to pay for her bar snacks. – Western Daily Press

The letter “e” has mysteriously vanished from the side of the Tesco Express store in Thornwell. Someone who wished to remain nameless, said, “To be honest, I hadn’t even noticed it had gone missing.” – Monmouthshire Free Press

A garage on Silk Mill Road, Watford, was broken into. No property was stolen, only moved about in the garage. – Watford Advertiser

A windscreen wiper on a Skoda in Chapel Road, Brightlingsea, has been bent. – Frinton and Walton Advertiser

A police car sped to the centre of Wells on Friday afternoon after information that there was an incident and shouting was heard. But police found no trace of anyone. – Wells Journal

A housewife who reported all the washing stolen from her line to the police at East Grinstead phoned later to say she’d found it. – East Grinstead Courier

Lech Walesa, the symbol of resistance to Communist rule and former president of Poland, has shaved off his moustache. – Daily Telegraph

Mundane quote of the day: ‘Every newspaper, from the first line to the last, is nothing but a web of horrors. War, crime, rapine, shamelessness, torture, the crimes of princes, the crimes of nations, the crimes of individuals, a delirium of universal atrocity. And it is with this revolting aperitif that the civilized man starts his morning meal every day. Everything, in this world, reeks of crime: the paper, the walls and the face of man. I cannot comprehend how clean hands could touch a newspaper without a convulsion of disgust.’ – Charles Baudelaire
Posted by Joe Moran at 11:43