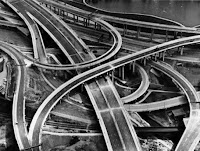 This little piece by me appeared in the Guardian travel section yesterday under the heading "My perfect day out in the UK". Er, I'm not sure I'd go quite that far ...

I wonder if I am the first person who has ever taken the train to Spaghetti Junction. I got off at Gravelly Hill station, northeast of Birmingham, and walked down the hill through a quiet suburb with Tudorbethan houses, gravel drives and faded neighbourhood watch signs. Then suddenly it was in front of me, the parabolic curve of a sliproad on the Aston Expressway - and beyond it, all the other roads on stilts: 18 of them, on 559 concrete columns. A giant pub called the Armada marked my last human outpost before I descended into the morass of underpasses underneath the Salford Circus roundabout.

I’d been inspired by French travel writers like Francois Maspero and Jacques Reda, who make intrepid journeys to mundane places like commuter suburbs and the undiscovered lands underneath elevated roads. I wanted to explore this place at the heart of the motorway system that most motorists pass through in a few seconds.

I had read that in the mid-1990s the council created a gravel beach here, with brave locals bathing in the network of canals underneath the junction. I now wondered if this was an urban myth, a joke designed to lure unsuspecting tourists into this wasteland. There was some sand and gravel, but no evidence that it had been placed there on purpose. I wandered around the whole 30 acres of the junction, and I saw some strange human remains – a Loohire chemical toilet turned on its side, some ripped hi-vi trousers – but no actual human being.

After a few hours I realised I was lost. My atlas was, naturally, no help, because it only showed the roads looping above me. When I tried to retrace my steps I kept encountering unpassable pylons crackling with electricity. Eventually I scrambled through a gap in a fence and walked across a mudbath of football pitch which led me back on dry land recognised by the Birmingham A-Z. On the suburban train back to Birmingham New Street, I got some odd looks with my shoes caked in dirt. I had returned from another country: the terra nullius underneath our elevated motorways.
Posted by Joe Moran at 12:43