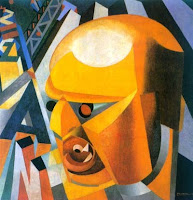 The pioneering motorists were invariably well-to-do, and dismissive of the slow-moving hoi polloi who blocked their way. This often developed into a proto-fascist extolling of speed, masculinity and war – as in the case of Filippo Marinetti, whose Futurist Manifesto of 1909 outlines his disgust at racing through the narrow streets of Milan and having to swerve into a ditch to avoid two sluggish cyclists. Marinetti wrote contemptuously of ‘the city’s watchdogs – useless guardians of spatial boundaries and private property … thrown against the doorsteps or flattened by tyres’. By March 1911 he had amassed ten convictions, including three for dangerous driving, and had his licence suspended for three months.

In 1916, in the middle of the First World War, Marinetti wrote of his fantasy ‘that the acceleration of life would cut down the arabesque of valleys and straighten the meandering of rivers, that someday the Danube would run in a straight line at 300 kilometres an hour.’

In Britain, which Marinetti berated as ‘a nation of sycophants and snobs, enslaved by old worm-eaten traditions’, they were not so sure. The UK was the first country to make racing on public roads illegal. In Evelyn Waugh’s Vile Bodies, the bright young things go to a motor race. Most ruthless and ridiculous of the speed demons is an excitable Italian artist called Marino, obviously based on Marinetti.

Nowadays, I suppose, we would put Marinetti in a reasonably priced car, send him round a racetrack and fete him on Sunday night telly.

Mundane quote for the day: ‘All you need to know about American society can be gleaned from an anthropology of its driving behaviour. Drive ten thousand miles across America and you will know more about the country than all the institutes of sociology and political science put together.’ - Jean Baudrillard, America
Posted by Joe Moran at 10:02