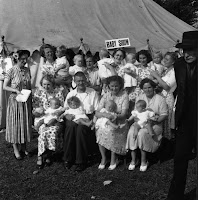 I did this piece on baby shows for the FT magazine last weekend:

The image, from a 1952 edition of Picture Post, is of a lost ritual: the baby show at the summer fête, with a group of proud mothers in their best floral frocks – and one father in the vanguard of social change – dandling bonny babies on their knees.
These infant carnivals were first staged in the early years of the last century, to encourage standards of mothercraft. They were often held in the first week of July, unofficially “Baby Week”. The babies would be examined by doctors and public health officers and judged on age, weight, general fitness and cleanliness. There was an award for best baby, but often every child who showed that they – and their parents – met general standards set by the judges would win some kind of prize, such as baby clothes, presented by the local mayor in his chain and robes.
By 1952, however, the baby show was no longer a useful form of health propaganda. The infant death rate had fallen dramatically and all these babies look the picture of health, a tribute to the post-natal care of the new National Health Service. The baby show became more of a simple “bonny baby” competition, the entrants judged on the quality of their rosy cheeks and wide eyes, with no sign of a white-coated public health official among the judges.
Sometime in the 1970s – perhaps not coincidentally, at the same time that the ethics of women’s beauty contests were also being challenged – it became unacceptable to hold a beauty parade of babies and award a prize for best in show. Mothercraft was outsourced to childcare manuals and eventually to television supernannies.
Yet the “best in show” ethos is making something of a US-led comeback, in virtual form. Parents can post pictures on websites such as ratemybaby and crazyaboutmybaby. Visitors are asked to vote on the children’s cuteness – and ratemybaby displays not only a top 10 ranking but a bottom 10. The Baby Show, held at Earls Court in October, is already soliciting entries for the 2011 “Face of the Baby Show”. The prize for this “perfect little smiler”, a sort of national bonniest baby, will be a contract with the child modelling agency Truly Scrumptious.
Posted by Joe Moran at 18:22