In defence of insincerity 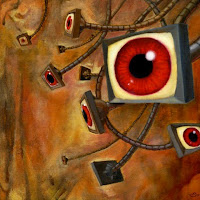 In case you didn't see it already, I did this piece for Guardian last week:

When Big Brother began ten years ago, the critical consensus was that it would reward a new breed of addictive attention-seekers, all searching for their brief moment in the pages of Heat magazine. “Camcorders and the internet have stolen our sense of shame, and soon the inhibited will be a minority,” argued Cosmo Landesman, fairly typically, in the Sunday Times. “The British are on the brink of becoming a nation of exhibitionists and voyeurs.”

As the programme begins its final series, it is clear that this wasn’t the whole story. True, the inhabitants of the Big Brother house over the last decade have not exactly been self-denying anchorites. But the housemates who proved most popular with viewers were those who seemed to be sincere, authentic and consistent in their behaviour. Meanwhile, the most reviled contestants, from “Nasty” Nick Bateman onwards, were the incorrigible flirts, the look-at-me poseurs, the two-faced operators. Anthropologists tell us that gossip is a basic human activity, a vital means of sharing information, forming friendships and oiling the wheels of social life. And yet the worst crime in the Big Brother house was to be caught talking about someone behind their back. No one anticipated how moral the Big Brother viewers would be, what high standards of sincerity and integrity they would expect from contestants – standards they would probably never live up to in their own lives.

The virtual forms of self-disclosure that have grown up in the age of Big Brother point to a similar shift in our understanding of public and private space. When people uninhibitedly lay bare their private lives online, from posting photos of themselves in states of inebriation to updating the world on their changing relationship status, it seems to me almost the opposite of exhibitionism. Like the Big Brother housemates who really do appear to forget that the cameras are there, these social networkers have simply lost any sense that there is a different type of language and behaviour that is appropriate for public as distinct from private life. Their default mode is that of a freeflowing, private conversation, albeit one that strangers can overhear.

More than 30 years ago, in his classic work The Fall of Public Man, the sociologist Richard Sennett warned against this confusion that was arising between “public and intimate life” and worried that “people are working out in terms of personal feelings public matters which properly can be dealt with only through codes of impersonal meaning”. Politicians who flourish in this new culture, such as Tony Blair and David Cameron, are those who can master what the linguist Norman Fairclough calls “public-colloquial discourse”, a hybrid style that combines formality and casualness, ceremony and empathy, publicness and privateness. Those who are more comfortable with traditional forms of oratory and rhetoric, such as Michael Foot and Gordon Brown, struggle to fit in. Our leaders are now supposed to give a convincing impersonation in public of how they would look and sound in private, which is why it is such a disaster when they inadvertently leave their microphones on (removing your microphone being, significantly, a disciplinary offence in the Big Brother house). But not all forms of public discourse can or should be conducted like a private conversation. Politics, as David Runciman pointed out in his recent book on political hypocrisy, is a necessarily public activity and there is nothing intrinsically wrong with a politician saying one thing in public and another in private.

It is not only politicians who must adapt to this new type of public sphere. Over the last few years I have noticed a very common neurosis among friends and colleagues. It is the fear, particularly felt by high-achieving professionals, that they will somehow be “found out”, that however many examinations they pass or however well they perform in their public roles, they will eventually be exposed as fakes and frauds. My hunch is that this anxiety is at least partly a product of our modern cult of sincerity, which has affected the nature of work in two important ways. First, formal work hierarchies have flattened out: first names, casual dress and open-plan offices are now common, and we are allowed to address our superiors in a fairly natural, spontaneous way. Second, both public and private companies stress the importance of fostering a strong corporate culture, in which all employees have to buy into a common ethos and embrace it enthusiastically. Modern workplaces value communication skills, teamwork, empathy – the sort of emotional intelligence that is so rewarded on Big Brother. I can recall watching the first series in 2000 and being amazed at how much the housemates hugged each other.

In our emotionally literate public culture, work has been reinvented not simply as the exchange of labour for money and status but as a source of existential meaning, something that fundamentally defines who we are. Of course, invidious hierarchies, cant and hypocrisy remain as resilient as they have ever been at work. But it is not enough, in this imperfect world, to be ordinarily efficient and competent; we are expected to be “on message” and believe wholeheartedly in what we are doing.

This is an unreasonable expectation, and it devalues the often heroic efforts we put into acting out a public role. One of my childhood heroes was John Noakes, everyone’s favourite surrogate uncle on Blue Peter. I remember the feeling of disappointment when I discovered that in real life Noakes was not the puppyishly enthusiastic, swashbuckling adventurer he presented on screen but a more introverted, cautious character who often resented the diktats of his BBC employers. “Noakesy was an idiot I invented,” he admitted later, “a stupid fool, my doppelganger who comes alive in the TV studio.” On reflection, however, I admire the extraordinary care and energy that this former actor must have invested in the creation of the semi-fictional character, “John Noakes”, who just happened to share his name. The man was clearly a pro, and his seamless performance showed great respect for his young viewers.

It is not only Walt Whitman who contained multitudes: we are all a complex mix of public and private versions of ourselves. Who is to say that the depressive, indiscreet, solitary self we might reveal in the pages of a diary written late at night is any more authentic than the measured, polite, urbane self we present to others during the day? A public self is also real – perhaps even more real than a private self, given the enormous amount of thought and effort we put into its successful realisation.

In public we may be more inclined to deceive and dissemble, but we are also more likely to be ironic, witty, playful, tactful, kind – all those rhetorical effects that make living with each other bearable, and which we deploy because we understand that the public is not the same as the private sphere. Sincerity may be a worthy (if sometimes unattainable) goal in our private lives. But what a suffocatingly earnest world it would be if we all had to act as if we were Big Brother contestants, behaving in public as we do in our living rooms.
Posted by Joe Moran at 19:22