The yellow line to nowhere 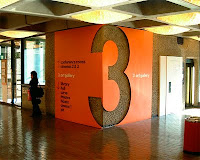 I gave a talk at the Kenilworth festival yesterday. Kenilworth held me in such a welcoming embrace that I couldn’t get out of it. It took me three quarters of an hour to find my way out of the town on to the right road, especially as my satnav wanted to take me to Stratford-upon-Avon. What a relief to arrive on the motorway and be guided home by Jock Kinneir and Margaret Calvert’s beautifully clear blue signs, even though I always think there is something melancholy about driving on motorways as the sun sets. It reminded me that I’ve been long been interested in signs and wayfinding, and of this piece I wrote a few years ago about the signage in the Barbican arts centre which has not seen the light of day until now:

In mythology, finding the way through a maze is a common initiation rite. Built at the gates of fortified towns, mazes warded off both human adversaries and evil spirits. When the Barbican arts centre first opened, visitors must have similarly felt like helpless non-initiates, dismissed as unworthy of the revelation of some hidden mystery. They would arrive at the wrong level, spend ages queuing up at the wrong box office or simply get lost in the concrete walkways.

Why was the arts centre so difficult to navigate? First, it was built later than the Barbican’s residential blocks, and the influential lobby of affluent tenants wanted an unobtrusive design. Much of the centre was hidden underground, and the façade was almost invisible from the lakeside entrance. Second, the centre’s ambitious multi-functionalism meant that it was really one big building housing lots of little buildings, linked together by a convoluted network of part-floors.

An early attempt to alleviate this wayfinding problem, the celebrated yellow lines on the ground which were supposed to serve as a modern-day Ariadne’s thread guiding visitors through the labyrinth, only made things worse. The first serious rethink came with the Pentagram redesign of the early 1990s. Some improvements were made. Level 5, where most people entered, became, more logically, the ground floor. The attempt to announce the Silk Street entrance more emphatically with gilded statues of the Greek muses was less successful. The multi-coloured, abstract mural climbing up the foyer wall, designed to give each floor its own individual character and colour (the colours gradually lightened as the floors rose) was too abstract to give anyone a better sense of direction.

Pentagram replaced the overhead signs with floor-mounted stands containing maps with ‘you are here’ red arrows. At least people now knew where they were, if not where they wanted to get to. The navigational problems persisted. In 2000, one of the consultants hired to rebrand the Barbican got lost on the way to the press launch. When he finally arrived, he announced the new motto: ‘Clarity and Simplicity.’

At last, with the latest foyer redesign, the Barbican lives up to this motto. The architects AHMM have stripped away the clutter and worked with the original elements of the building. There is a proper glass foyer in Silk Street to welcome incomers, and the internal bridge has been moved so people can identify all the different areas more easily. The signage is bigger and bolder: there are huge floor-to-ceiling floor numbers, cut out of orange-clad walls to reveal the concrete underneath, and giant 3D arrows, more reassuringly assertive than yellow lines. Navigating a complex, multi-level building like the Barbican will never be straightforward. But if they do not arrive at their destinations easily, visitors now at least travel more hopefully. If anyone is still stalking the corridors with a puzzled expression, it will only be the ghost of a concert-goer from the early 1980s, tutting about his missed train and still looking for the way out.
Posted by Joe Moran at 11:05