Sartre at the bus stop 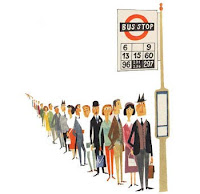 I don’t write about queuing much any more – I’ve said a lot about it before and, anyway, now I’m a megastar I can get my people to queue up for me – but here are some thoughts about waiting in line prompted by having to get the bus this week because my car was being serviced.

In his Critique of Dialectical Reason, Jean-Paul Sartre describes a queue forming early one morning at a bus stop on the Place Saint-Germain in Paris. He argues that those lining up at the stop ‘achieve practical and theoretical participation in common being’ because they have a shared interest, as people who regularly use the bus service and who all have business that day on the Right Bank. But compared to people gathered together for some collective purpose like a street festival or popular uprising, these bus-stop queuers produce only a ‘plurality of isolations’. The bus passenger does not know how many people are going to be at the stop when he arrives or how full the next bus will be, and so is encouraged to see his fellow queuers as competitors for a potentially scarce resource. He takes a ticket from a machine by the stop, which indicates the order of his arrival and assigns him an order of priority when the bus arrives. By accepting this system, he acknowledges that his identity is interchangeable with that of the other passengers, a ‘being-outside-himself as a reality shared by several people’ which assigns him a place in a ‘prefabricated seriality’.

I would guess that Sartre didn’t often have to wait for a bus. Indeed, this passage is typical of the slightly begrudging, tangential way in which the quotidian emerged as a subject of intellectual inquiry over the last century. Sartre uses the bus queue as an easily understood example, raw material for a thought experiment which allows him to move on to weightier matters of politics and philosophy. He sees it as an abstraction of the laws of political economy, based on the competitive quest for a limited resource - in this case, seats on the awaited bus. The actual queue itself is devoid of any wider meaning: ‘This unity is not symbolic … it has nothing to symbolise; it is what unites everything’. The example only works because of the nature of the queue that Sartre describes. This orderly cohort of people taking tickets from a machine would certainly seem very strange to a contemporary British bus queuer.

Mundane quote for the day: ‘Habit is thus the enormous fly-wheel of society, its most precious conservative agent. It alone is what keeps us all within the bounds of ordinance, and saves the children of fortune from the envious uprisings of the poor. It alone prevents the hardest and most repulsive walks of life from being deserted by those brought up to tread therein. It keeps the fisherman and the deck-hand at sea through the winter; it holds the miner in his darkness, and nails the countryman to his log-cabin and his lonely farm through all the months of snow; it protects us from invasion by the natives of the desert and the frozen zone. It dooms us all to fight out the battle of life upon the lines of our nurture or our early choice, and to make the best of a pursuit that disagrees, because there is no other for which we are fitted, and it is too late to begin again.’ – William James
Posted by Joe Moran at 13:16