The light of common day 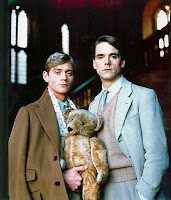 Some bad angel intent on eating up all my useful hours, who goes under the pseudonym of DonalFOley, has put the whole of the Granada TV series of Brideshead Revisited on YouTube:

and under the thin pretext of doing research for my TV book I’ve been wallowing in every episode.

It is the most anti-everyday book – and, by extension, TV series – ever written/made. It is all about cloudless days in June, bells ringing out high and clear over the gables and cupolas of Oxford, exhaling the soft airs of centuries of youth etc. etc. It is a strange thing to be watching when the Brideys of this world appear to be in the ascendant. I wonder what they made of it in 1981, the year of the Toxteth riots.

Charles Ryder, emerging at last from the charms of the Marchmains and Brideshead, reflects: ‘I had come to the surface, into the light of common day and the fresh sea-air, after long captivity in the sunless coral palaces and waving forests of the ocean bed. – I had left behind me – what? Youth? Adolescence? Romance? “I have left behind illusion,” I said to myself, “Henceforth I live in a world of three dimensions – with the aid of my five senses.” The light of common day, we are clearly supposed to think, is a serious comedown.

This blog should of course heartily disapprove of this attitude, especially as I am sure that if I appeared in the novel I would be one of those dull people in Charles’s rooms when Sebastian vomits through the window, and whom Charles quickly ditches in favour of his rich, beautiful friend. Even if I were willing to pay the price of admission to the golden land of Brideshead, as Charles is, I’m sure they would show me the tradesman’s entrance. But sometimes even this blog can see the attractions of following the “wildest chimeras” before “the vision fades, the soul sickens, and the routine of survival starts again”.

Anyway, as a useful corrective, Ken Loach has launched his own channel on YouTube with full versions of some of his films: Kes, Cathy Come Home, Poor Cow. More useful hours to be eaten up …
Posted by Joe Moran at 12:52