A life in pieces 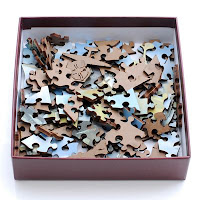 I’ve been reading Margaret Drabble’s The Pattern in the Carpet: A Personal History with Jigsaws. It started out as a cultural history of jigsaws but became a memoir about family history and living with depression. The advantage of a jigsaw for the depressive is that ‘it is pre-made, its limits finite, its frame fixed’, unlike the formlessness of writing. The book ends with a rather bleak assessment of ‘the pointlessness of survival, the uselessness of all the little strategies by which we manage to stay alive and fill our time and get through our days’.

Drabble reminds us of the often unnoticed use of the jigsaw as metaphor and simile in, for example, the logos of Microsoft Word and Wikipedia, and the screen of the Barclays Hole in the Wall. Georges Perec – another mundanologist whom Drabble likes in small doses, as do I – has dubbed these instantly recognisable fretsawed shapes ‘les bonhommes’ [the little chaps], ‘les croix de Lorraine’ [the double crosses] and ‘les croix’ [the cross-bars].

Drabble also reveals that she was brought up within the acoustic footprint of the Great North Road, a biographical detail she shares with another high-achieving grammar school girl, Margaret Thatcher. ‘My first distinct memory is of traffic,’ writes Thatcher in the opening line of her memoirs. This is Drabble’s more lyrical account of lying in bed listening to the lorries:

All night long they journeyed, and I would lie in bed listening to the swish and the boom, the swish and the boom, as they came and they went, as they came and went. I loved that sound … it was like a cradle, endlessly rocking; it was like a lullaby, it was like a river pouring past, it was like the incessant movement of the Earth. You were a child in bed, trying to sleep, but the road was awake and alive with travellers, and therefore you were not alone, and life had not come to a grim halt. The blood coursed through the body, and the traffic along the road. Your heart would not seize up and stop if you fell asleep. It would beat on until the morning.

An interest in the everyday appears to be contagious. Alex Horne had a piece in last week’s Observer about his love of service stations, and a reporter from Newsnight spent the election campaign camping out at Donington Park services on the M1. And I don’t listen to the Archers but according to the Guardian it has a new character, a milkman called Harry who maintains a blog which is full of ‘fascinating stories about semi-skimmed milk’.

Mundane quote for the day: ‘Don’t you think there is a certain resemblance between the mystery of the Mass and what I am trying to do? I mean that I am trying … to give people some kind of intellectual pleasure or spiritual enjoyment by converting the bread of everyday life into something that has a permanent artistic life of its own … It is my idea of the significance of trivial things that I want to give the two or three unfortunate wretches who may eventually read me.’ – James Joyce
Posted by Joe Moran at 12:29