Such, such were the joys 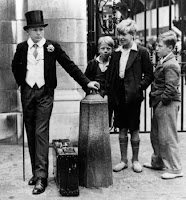 By coincidence I’ve been reading two books – John Peel’s Margrave of the Marshes and Harry Thompson’s biography of Peter Cook – which touch on the strange everyday rituals of British public schools in the early fifties. This is Peel on Shrewsbury school:

‘A boy called Cox was my study monitor for a year and amongst the tasks he assigned me on a regular basis was that of boot-polishing his bicycle tyres. When he adjudged them clean and shiny enough, he would take his bike for a short spin in the mud before telling me to start again.’

And this is Thompson on Cook’s school, Radley:

‘In summer the “wet-bobs” rowed and the “dry-bobs” played cricket. First years had to have all their jacket buttons done up, which could then be loosened at the rate of one a year … The prefects alone were allowed to carry their gowns, to stroll past the clock tower - others had to jog past it in single file - and to go to the lavatory with the door shut … The Radley day began at 6.45 a.m. with a compulsory and thorough icy shower, as checked off by a prefect reclining in an adjacent hot tub … If you were fagging for your Senior much of the weekend was spent shoe-cleaning, toast-making and warming outside lavatory seats.’

This sophisticated, institutionalised bullying sounds like Tompkinson’s Schooldays in Ripping Yarns – probably not coincidentally, because Michael Palin went to Shrewsbury a few years after Peel. I’m so glad I went to the local comp …

Mundane quote for the day: ‘Few tasks are more like the torture of Sisyphus than housework, with its endless repetition: the clean becomes soiled, the soiled is made clean, over and over, day after day … Eating, sleeping, cleaning – the years no longer rise up towards heaven, they lie spread out ahead, grey and identical. The battle against dust and dirt is never won. Washing, ironing, sweeping, ferreting out fluff from under wardrobes – all this halting of decay is also the denial of life; for time simultaneously creates and destroys, and only its negative aspect concerns the housekeeper.’ – Simone de Beauvoir, The Second Sex
Posted by Joe Moran at 21:00