The golden age of telly 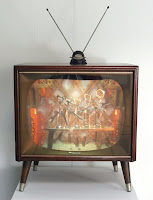 I’m working on a new book provisionally titled Television: An Intimate History, although it won’t be finished for years. So I’ve been reading the diaries of an avid television watcher, Kenneth Williams. It was interesting to come across these crabby entries about the supposed golden age of family telly, the 1970s, including some off-message judgments on now fondly remembered programmes:

‘We saw the television “Christmas with the Stars” – stars indeed! What a joke. It’s all the “jobs for the boys in the BBC” stuff with inane excerpts from Dad’s Army etc. Television has really succeeded in creating a number of rep companies, with all the same provincial tattiness and the same sort of factious following and internecine rivalries. Utter muck.’

‘Saw Ronnie Corbett on television. Jokes about “The vicar gives me a blessing and I’m getting home & the wife says ‘You’ve been blessed again, haven’t you?’” The blatant denigration of religious practice made one sick. I turned it off.’

‘Saw Richard Briers in a comedy series [The Good Life]. It was terrible. Not a laugh line in it … it was all tasteless and unpleasant … when a cock bird was indifferent to a hen, Briers’ line was “perhaps he’s a queer …” Oh dear.’

‘That ghastly series Porridge about prison life was showing … How that ever became accepted for television is beyond me! The tastelessness, the romanticising of villainy …. The business of making criminals attractive … the winking of corruption within the prison service … it is sickening and disgusting.’

‘We saw a bit of TV but it was dire. Benny Hill looks more and more like a desperate adipose decrepit.’

‘Louie and I watched Dr Zhivago on TV in the evening and it was extraordinary to see so much expense and time taken over with such tedious rubbish. If there was one close-up of Omar Sharif looking dewy-eyed there was two: he looked about as Russian as my arse.’
Posted by Joe Moran at 19:30