Invasion of the one-eyed metal aliens 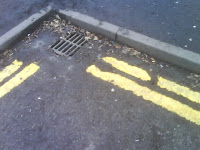 When this piece about the birth of the parking meter was published in the FT at the weekend (a slightly different version), my dad said, ‘That was just another piece ripped off from the roads book, wasn’t it?’ Er, no actually. That book was mainly about motorways, where there are no parking meters. Fond as I am of occasional recycling, I had to write this one from scratch.

In Grosvenor Square, London, on 10th July 1958 at 8.30am, George Nugent, the Parliamentary Secretary to the Ministry of Transport, ostentatiously pressed a sixpence into a slot to christen the first British parking meter. At the same time, the other 646 meters on the streets of Mayfair were all uncovered.

The parking meter gave birth to a new urban phenomenon, the traffic warden, and by the end of the day these eight Westminster Council employees had affixed a slip of paper to many cars imposing a ten shilling fine on the owner for exceeding the time allowed or for not paying at all.

The meter system was meant to stop motorists hogging a space all day. Parking by meter cost sixpence an hour, a shilling for two hours and ten shillings for up to four hours – which was the upper limit. Grosvenor Square was normally full of cars but on the 10th July about one in eight of the parking spaces remained empty. Naturally, the streets outside the metered zone were crammed full of parked cars. After two weeks of the scheme, the average daily takings per meter was just three shillings.

Parking meters had arrived late to Britain. They were first used in Oklahoma in 1935, and had spread to almost 3000 towns and cities by 1950. In the postwar years, however, British politicians were anxious not to penalise motorists because the car had become a symbol of the end of austerity and the promise of affluence. Only the chaos caused by parked vehicles in the centre of London persuaded the authorities finally to act. They were quickly followed by other councils: by 1965, 12 cities outside London also had parking meters.

Motoring organisations protested in vain, and in his 1960 hit, “Fings ain’t wot they used t’be”, Max Bygraves complained of “parking meters, outside our doors to greet us”. Still, parking restrictions in 1958 hardly seem Draconian by today’s standards. At 6.30pm, covers were put on the meters and parking was free until 8.30 the next morning – and all weekend.

The coin-operated meter is now an endangered species, as councils move towards pay-by-phone systems for street parking. But the arrival of the parking meter was a defining moment which marked the end of an era when motorists could park their cars wherever they liked.

Mundane quote for the day: ‘I went up streets of dark purple and vomit green, all set at angles like ham sandwiches … and there were the peasant masses … shuffling along in their front-parlour-curtain dresses and cut-price tweeds and plastic mackintoshes, all flat feet and fair shares … and I thought, my God, my Lord, how horrible this country is, how dreary, how lifeless, how blind and busy over trifles!’ - Colin MacInnes, Absolute Beginners
Posted by Joe Moran at 19:04