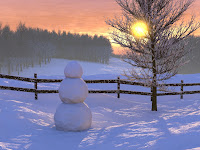 School’s out, for winter. They have closed my uni for the rest of the week because of the weather, so I really should be out throwing snowballs at policemen. But it’s as cold as an endorsement of the PM from his cabinet out there. Still, it’s nice and toasty in here and all I’ve seen out of the window all day is a cloudless, azure blue sky and the vapour trails of planes leaving from John Lennon airport. It might as well be midsummer.

This is all bringing back memories of the winter of discontent in January 1979, when Glossop was virtually cut off from the rest of the world for a month and on one day I was the only pupil who turned up at my primary school. You see, I was a girly swot even then.

Not that 1979 was anywhere near as bad as the winter of 1963. ‘The English, of course, have no snow plows, because this only happens once every five years, or ten,’ wrote Sylvia Plath to her mother, ‘So the streets are great mills of sludge which freezes and melts and freezes.’ She killed herself on 6 February. That was also the winter, according to Roger Deakin in a lovely piece he wrote about ice skating in the fens, that someone drove a Mini along the frozen river Ouse from Ely to Littleport. (I had heard that story about another river and always assumed it was an urban myth, or at least a rural one, but I will take Deakin's word for it.)

Nor was this as bad as the winter of 1947, which was psychologically if not statistically worse than 1963 because it came right in the middle of other privations. The snow, wrote Christopher Isherwood, ‘assumed the aspect of an invading enemy’. Worst of all, they cancelled television for a month to save fuel.

The Deakin piece is from a collection, Caught by the River, edited by the guys who write and manage the most excellent website of the same name (http://caughtbytheriver.net/). These clever chaps also run Heavenly Records - they named the book and website after a Doves song so, you see, rivers really are the new rock’n’roll – and they asked me to write something for it which I definitely will get down to sometime soon, guys.

Here’s to flowing water and balmier times when we can all go down to the river again.

Mundane quote for the day: ‘I’m living now. I want it exciting. Mind you, I can get excitement from a puddle.’ – David Hockney on R4's Today programme
Posted by Joe Moran at 20:40