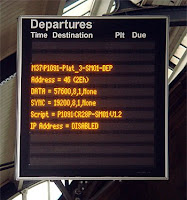 OK, since we’re on a Chekhov birthday riff, here is my favourite quote from Uncle Vanya:

The professor, as always, sits writing in his study from morning until far into the night … He complains endlessly about his misfortune, although in actual fact he’s quite unusually fortunate … Just consider this. A man spends precisely twenty-five years reading and writing about Art when he understands precisely nothing about it. For twenty-five years he chews over other men’s thoughts about realism and naturalism and every other kind of rubbish. For twenty-five years he reads and writes about things that clever people have known for years already, and that stupid people don’t care about anyway. For twenty-five years, in other words, he’s been shovelling a lot of nothing from here to nowhere. And yet what an opinion he has of himself! What pretensions! He’s reached retiring age, and not a soul has ever heard of him. He’s completely unknown. So for twenty-five years he’s been usurping another’s rightful place. Yet lo and behold – he paces the earth like a demi-god!

I may not be a professor, and I don’t think I’m quite as self-deluded as Serebryakov, but that line about ‘shovelling a lot of nothing from here to nowhere’ always makes me wince. Ouch. I’ve just got back from doing a talk at a conference organised by postgrad History students at the University of Leicester. And I felt, as I usually do at conferences, that I was just trying to move a few ideas around on a page like a fussy-eating child who doesn’t want to eat his greens moving food around on his plate, and trying to fool people that the plate looks different – only this time I’m trying to convince them that there’s more rather than less on the plate. The odd thing is that, unlike the fussy-eating child, I usually manage it. Or maybe it is just that academics are more polite than parents.

Anyway, everyone was very nice, welcoming and interesting - you can check out their collective blog at http://www.newhistorylab.org/ - and one or two kind people had even read my book.

Very flat, Leicester. And once again I was acquainted with platform 7 at Nuneaton railway station – that mundane metaphor for our contemporary condition of transit and exile, as we desperately search on the annunciator board of life for our connecting train to who knows where.

Mundane quote for the day: ‘You cannot read the lot of those who daily pass you by in the street. How do you know the wild romances of their lives?’ – Elizabeth Gaskell, Mary Barton
Posted by Joe Moran at 21:36