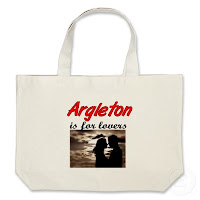 My last words on Argleton, from yesterday's Guardian:

It may be an unpromising place to look for Xanadu, but just north of Liverpool off the A59 there is a town that is already entering the annals of myth. This town, “Argleton”, appears on Google Maps, by mistake, and nowhere else. Mike Nolan and Roy Bayfield of Edge Hill University are the modern-day Marco Polos who discovered it and there is now a “save Argleton” campaign on the web which is urging Google not to correct the error.

The preservationists have poetry on their side. Argleton is a fortuitously evocative name, sounding a bit like Edward Thomas’s Adlestrop, that village in deepest England known only by its railway station; and even more like something out of an old Ealing comedy, about a town fighting for its autonomy against the faceless drones of Whitehall.

Perhaps the save Argleton campaign also marks the beginnings of a dissident movement, a reaction against the speed and stealth with which Google is mapping every last blade of grass in the world. It is easy to overlook how quickly this has happened. A decade ago, only government and the military could view comprehensive aerial photography of the UK. Even when aerial maps began to be marketed to the general public, they were endearingly primitive. Who now remembers Getmapping.com and its “millennium map”, a mosaic aerial photograph of Britain photographed by Rockwell Aerocommanders flying at 5000 feet? I bought Getmapping’s photographic atlas of London as a Christmas present for my brother in 2000. The Guardian called it “a sublime book … an amazing labour of love”. What a waste of £40 it was – and how strange it now seems that someone would exchange folding money for a coffee table, non-zoomable-in version of what you could find on the internet for free a few years later.

Now Google Earth allows us to fly effortlessly from deep space to our own back garden in a matter of moments, and then switch to Google Street View and check out the state of our neighbours’ curtains. And while I don’t agree with the anti-privacy campaigners who have tried to stop them doing this – the earth is not copyrightable, after all, and a street is a public space – it is still disconcerting to discover, as I did recently, your own front door in high resolution on the web.

This is where Argleton comes in. Maps help us to explore the world but they can also sever us from it, reducing it to a matter of Cartesian lines and intersections – or, in Google’s case, vectors and pixels - rather than real, living places. In her book A Field Guide to Getting Lost, Rebecca Solnit argues that getting lost has become a subversive and creative act, releasing us from our over-directed, intricately mapped existences and reacquainting us with the local and vernacular.
Perhaps this explains the schadenfreude that some people feel when they hear about motorists deposited in village ponds by their satnavs. The discovery of Argleton is part of the same reassertion of the local, the happy realisation that the world is not completely mappable, that not even Google knows as much as God or the people on the ground. The Argletonians are the contemporary equivalent of the apocryphal local leaning on a gate who, when asked directions by a motorist, sucks his teeth and says, “Well, I wouldn’t start from here if I were you”.

I am happy to confirm that, for now, Argleton remains a reassuring presence on Google Maps. In fact, having made my own explorations, I am even happier to confirm that it exists after all. Argleton is a real-life version of Brigadoon, the magical Scottish village dreamed up in Hollywood. By chance, I happened to visit it on the one day every hundred years that it appears out of the mists that drift across the West Lancashire plain. There I met the surveyor from Google Maps, who has been persuaded to stay in the town forever so that its magic spell will not be broken, and is now married to a local beauty with an uncanny resemblance to Cyd Charisse. So, all you preservationists, fear not. There is no need to “save Argleton”. Argleton endures; it will outlive us all.
Posted by Joe Moran at 18:26