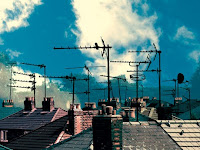 I went to see an excellent exhibition at Urbis in Manchester yesterday: Ghosts of Winter Hill, about the role of television in the city since the formation of Granada in 1956. The exhibition’s peg was the switching off of the analogue signal this year. There were some wonderful and rather touching mock-ups of 1950s and 1960s living rooms with Ekco bakelite television sets and forlorn-looking armchairs. It was the exhibition’s title that caught my eye. The first TV transmitters needed good elevation so they were built in these remote, romantic-sounding places: Holme Moss, Kirk o’Shotts, Emley Moor, Winter Hill. And ‘ghosts’ is just right too: there was something ethereal about those grainy 405-line transmissions, and early viewers were often troubled by ‘ghost images’ where one signal was laid on top of another.

Mostly it struck me, watching unremembered old clips of Granada TV’s Kick Off and The Army Game, how much of television is what Larkin called a ‘forgotten boredom’. Ludovic Kennedy, who died earlier this year and who is perhaps the only television presenter to fall asleep while interviewing someone, wrote in his autobiography that television was ‘comparable to a long train journey. As one gazes vacantly out of the window a succession of ever-changing images passes by. Occasionally something – the look of a house, a cricketer bowling, flowers in a garden – momentarily diverts the attention until another image takes its place, then it too vanishes and is forgotten, and presently, as with the television, we look away or pick up a newspaper or a magazine. For the essence of television is its ephemerality: it is a world of flickering images, each dying at the moment it is born … like the water tap or the electric light switch, we can take it for granted, turning it on or off at will, shifting from this channel to that, seeing a horse being born, survivors being pulled from wreckage, Miss World being crowned, one fish gobbling up another.’

Mundane quote for the day: ‘Even filling a Christmas stocking with tiny things was like writing a sonnet, keeping to the agreeable limitations of a strict form. Mundane things filled her with delight: picking up the blackened twigs from the lopped plane trees in the street, and later watching astonished as they burst into bud in a vase.’ – Jan Struther, Mrs Miniver
Posted by Joe Moran at 10:44