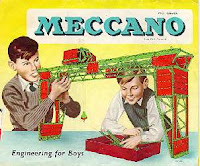 I was delighted to be sent an advance copy of David Kynaston’s Family Britain 1951-1957, the latest volume of his magisterial survey of Britain in the post-war, pre-Thatcher years – although I would have bought it anyway, because the first volume, Austerity Britain, was my favourite book of 2007. Like its predecessor, Family Britain offers some beautifully thick and humane descriptions of everyday life from our recent past. How can you not like a book that manages to turn the memoirs of Noddy Holder into a rich historical archive? Every so often Kynaston interrupts the narrative with these wonderfully evocative lists:

No, it doesn’t really work.

Mundane quote for the day:
‘May you be dull –
If that is what a skilled,
Vigilant, flexible,
Unemphasised, enthralled
Catching of happiness is called.’ – Philip Larkin, ‘Born Yesterday’
Posted by Joe Moran at 12:18