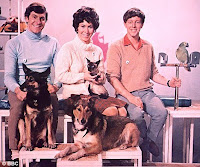 I’ve been enjoying Dear Blue Peter (ed. Biddy Baxter), a collection of letters and emails received by the Blue Peter Correspondence Unit since it began in 1962. At its peak in the 1980s, the programme had an average weekly postbag of seven thousand letters. There are some lovely, touching letters from child viewers, and from parents who write in to say how much the programme means to their children. There are also some rather strange letters from grown-ups who seem to watch the programme primarily to get angry. The assigning of dark significance to idiosyncratic details, the humourless taking of offence, the suffocating earnestness … needless to say, students of the blogosphere will feel right at home. Here is a brief selection of the letters.

Dear Peter
I liked when you tried to ride a killer whale. I would like to see you try to skin dive and kill a shark. I have liked everything that Blue Peter has done especially that fort that Val made from lollypop sticks
Yours faithfully,
Ronald, Falkirk (1969)

Dear Miss Singleton,
Do please stop doing your hair as if you were a young girl. It is unbecoming, undignified & stupid – it makes you look like one of those cheap flappers.
I often wonder what the Royal Family think about it? Do please look your age when appearing.
Yours hopefully,
HWCC, Sussex (1972)

The Editor, Radio Times
Dear Sir
There is much to admire in Blue Peter but yesterday it reached the depths of inanity with the preposterous celebration of the birthday of two cats whose appearance has never been more than minimal and whose indifference to the proceedings are monumental … (1983)

Mundane quote for the day: ‘I’ve always felt that civilised behaviour was generally on a knife-edge. I can remember feeling that at school assemblies when someone would get up there and start talking. I can just remember thinking, ‘Gosh, if a man on a length of wire, stark naked suddenly swung across the stage, what would happen?’ ‘What would happen if I ran up there and stuffed a banana in his face?’ – something like that. I could almost do it. I don’t know if there’s a sort of syndrome for that. But I just felt these people are all playing a certain game, terribly sort of straight and focused, but only inches away from insanity.’ – Michael Palin
Posted by Joe Moran at 16:01