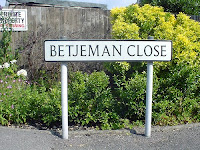 To coincide with a new exhibition at the London Transport Museum (http://www.ltmuseum.co.uk/whatson/128.aspx), the Financial Times asked me to come up with the five best things to come out of suburbia for a feature it runs on Saturdays called “The List”. I’m not sure if these are really the best things, but they are five really good things I could come up with when a next-day deadline was looming.

Few people had a good word to say about mock Tudor houses when they were built in the inter-war years. George Orwell called them “semi-detached torture chambers” and cartoonist Osbert Lancaster christened their style “bypass variegated” because so many of them were built along new arterial roads. But nowadays the suburban semi is one of the most prized houses in the market. Despite their reputation for uniformity, these early suburban homes are much more varied than today’s identikit versions. In 1930, four-fifths of housebuilders had fewer than ten employees and each firm built only a few houses each year, ensuring idiosyncratic designs.

Brought up in Highgate, Betjeman is the poet laureate of suburbia – especially of “Metroland”, the area of northwest London served by the Metropolitan line, and the subject of his celebrated 1973 television documentary. Perhaps his loveliest poem about suburbia is “A Subaltern’s Love Song”, a paean to a young Surrey woman called Joan Hunter Dunn and her world of “the six-o'clock news and a lime-juice and gin” and golf club dances in leafy Camberley with its “mushroomy, pine-woody, evergreen smells”.

Suburbia is the natural home of the British sitcom, offering endless scope for its theme of being trapped in a mundane environment. In The Good Life (1975-78), Tom and Barbara Good dig up their back garden to become self-sufficient in Surbiton; in Butterflies (1978-83) housewife Ria (Wendy Craig) is stuck in what she calls “a hut in a suburban jungle with dust delivered daily”. For a darker view, Ever Decreasing Circles is a much underrated sitcom (1984-89), with Richard Briers as a man driven demented by his responsibilities on the residents’ committee.

Suburbia, according to cultural critic Michael Bracewell, is “the spiritual home of English pop”. It is something to kick against, subjected to the punkish derision of The Members (“The Sound of the Suburbs”, 1979) or Hard-Fi’s current songs about dead-end life in Staines. But youth boredom turns satellite towns into hubs of creativity: to make sense of the surrealism of David Bowie, the social anger of the Jam or the anthemic sound of Suede it helps to know where they came from: Bromley, Woking and Haywards Heath.

From 1960 until his death this year, J.G. Ballard lived in the west London suburb of Shepperton. A few years after he moved there, it began to be hemmed in by the M3 and Heathrow airport. “The twentieth century at last arrived,” Ballard wrote approvingly, “and began to transform the Thames Valley into a pleasing replica of Los Angeles, with all the ambiguous but heady charms of alienation and anonymity.” In his fiction, he depicted this new world as an antidote to the British obsession with nostalgia and preservation.

Mundane quote for the day: ‘One day perhaps a Dickens of the suburbs will arise, to immortalize the life and language of suburbia. His task will be to portray individual character and idiosyncrasy similarly emerging from today’s most typical setting; and also, like Dickens, to publicize abuses: the exploitation of the innocent suburban householder by Building Societies and speculative builders, and the loneliness of the housewife marooned at the end of the newest road in the spreadeagled building estate. But, as Dickens proves so well, only someone who first discovers for himself, through his own affection for it, the peculiar virtues of the world in which he is interested, can fairly isolate its vices … These elusive territories – now the heart of England – past which we unobservantly speed in motor cars and trains and over whose roof-dappled greenery we may all soon be cruising in aeroplanes, will no longer be a strange unknown country.’ - J.M. Richards, The Castles on the Ground, 1946
Posted by Joe Moran at 11:01