A rainbow on the bypass 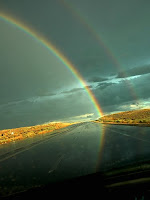 As you may have gathered by now, I like stories that reveal the exotic in the mundane.

Like this one about the Kingston bypass, opened in the mid-1920s as Britain’s first dual carriageway. For a time it basked in the reflected glamour of the jazz age. ‘Give me the Kingston By-Pass on a Saturday afternoon’, sang Noel Coward in one of his less sparkling lyrics. Travelling on these fast new roads seemed like a new way of seeing the world. Driving on the Kingston bypass in the 1920s, the writer Wickham Steed was convinced he had driven under a rainbow spanning the road in a perfect semicircle: ‘I ran slowly through it, in a strange greenish-yellow light with a ruddy tinge, for about 100 yards, and left it behind.’ Another writer, C.J.P. Cave, pointed out that driving through a rainbow was as impossible as jumping over one’s shadow: ‘Most unfortunately a rainbow is an affair of refraction and reflection from raindrops, and its centre must always be opposite to the sun’. Despite all the scientific evidence that a rainbow simply runs away from us when we approach it, Steed was insistent. He had driven through a rainbow in the manner of Shelley’s cloud marching through the ‘triumphal arch’ of the ‘million-coloured bow’ along with ‘hurricane, fire and snow’.

A couple more pieces by me from the FT:

Mundane quote for the day: ‘Each time the doors sighed open at a lighted station they let in a gust of subterranean wind. It tasted metallic, of burned carbons and newsprint – a warm, industrial mistral, as particular to the city as Big Ben or red buses, quite different from the rotting vegetable odour of the New York subway or the reek of Gauloises in the Paris Metro. Everyone aboard the carriage had mastered the trick of looking as if they were alone in an empty room. Everyone was travelling under sealed orders to a separate destination. In a fleeting conceit, I saw us all as members of the Underground, moving in secret through Occupied London, and for the first time on the trip, the city felt like home again.’ (Jonathan Raban, Coasting)
Posted by Joe Moran at 10:43