Great bus journeys of the world 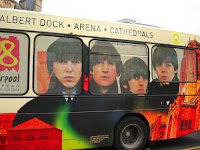 They’ve been resurfacing the road outside my place of work this week, which means that no one can get in the car park. Everyone has been asking me, presumably because they think I am the oracle on all things asphalt-related, how long it takes to tarmac a road. To which the only sensible answers are a) how the hell should I know, and b) please feel free to read my book, which more than exhausts my expertise on this topic. So I have been getting the bus to work this week – the famous no. 82 taken by George Harrison and Paul McCartney when they went to school at the Liverpool Institute, the remains of which are across the road from our building.

In Harold Evans’s new book, My Paper Chase, there is a memorable image of him as a young cub reporter, reading Thucydides’s History of the Peloponnesian War on the top deck of a bus from Oldham to Ashton-under-Lyne, quite near to where I was brought up. It made me wonder how much autodidacticism has occurred on buses throughout human history, how many great deeds and works have been conceived and perhaps even written on them. This is a piece I wrote a while ago for the Guardian about buses:

No change please: Bus routes matter far beyond the timetables. They capture a kind of invisible social evolution

According to a rather cheering statistic in the latest edition of Social Trends, 96% of Britons live within 13 minutes' walk of a bus stop. When the 1985 Transport Act deregulated services outside London, many predicted that the privatised companies would simply abandon unprofitable routes. In fact, this hasn't happened.

The service may be terrible; bus use may be static or falling everywhere apart from London; and two-thirds of respondents to a recent British Social Attitudes survey may have agreed with the statement: "I would only travel somewhere by bus if I had no other way of getting there"; but whether through local authority intervention or the inertia of habit, the old routes largely remain as an invisible constant in local life.

In the 70s, Milton Keynes came up with the perfect solution to the dispersed layout of the new city: a "dial-a-bus" service that would allow people to divert bus drivers to pick them up. But it never really worked. A bus route needs to be unchanging. Buses are the poor relations of urban transport partly because of this necessary communality, which is an affront to the ideal of individual consumer freedom that has dominated public life since the 50s, when bus use began to decline. A bus forces passengers into fixed timetables and designated routes. That is their point.

Of course, it's easy for me to say that. I can smugly point out that my journey to work is along an illustrious bus route - the 82 from Speke to Liverpool city centre, the number and itinerary of which has not changed since George Harrison and Paul McCartney met on it in the early 50s. McCartney later claimed that this daily bus ride formed the inspiration for part of the Beatles' song A Day in the Life, the bit where he makes the bus in seconds flat and goes upstairs to have a smoke - which still happens occasionally on the 82, despite the no-smoking signs.

Unlike McCartney's childhood home, the 82 is unlikely to be preserved for the nation by the National Trust. But it has found a modern-day Pevsner in the form of the photographer Tom Wood, who has been pointing his camera out of Liverpool bus windows since 1979. The project, inspired by his daily commute, consists of more than 100,000 photos. What I like about his work is the contrast between all these unnamed people, absent-mindedly following their routines day after day, and the tiny changes in the urban environment. Undying bus routes are perfect for capturing this kind of invisible social evolution.

Bus routes are no respecters of the boosterism of urban regeneration, with its talk of "flagship developments" and "strategic gateways". The routes simply go where the passengers are, connecting the tarted-up areas of city centres with more marginal, insalubrious spaces. It is no coincidence that rioters in Lille and Strasbourg in the late 90s targeted buses that linked the banlieues to the city centre. A social worker observed: "If you live at the end of the bus route, the bus becomes a symbol of the life and wealth of the city you can't afford to enjoy."

But the bus route is also an intangible network that is a source of continuity and connection for its initiates. In the 90s, the sociologists Ian Taylor, Karen Evans and Penny Fraser encountered an extraordinarily sophisticated "local bus knowledge" in Manchester and Sheffield - not just about timetables and routes but "a more abstract, aesthetic assessment of the city as a set of places seen from the bus and now connected up in the memory". The lesson of the bus route is that history is uneven. With our eyes on the zeitgeist, we forget that historical change can also be slow and incremental. Headlines come and go; the bus route meanders on.

A belated but nice piece about my book from the Sunday Herald: