No need to reply 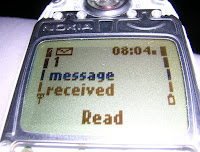 I wrote this article, ‘Today's cultish interactivity is a poor substitute for a proper public sphere’, for the Guardian earlier this month:

When historians draw a line around the first decade of this century, they will measure the traffic in text messages, wade through the “have your say” sections on online newspapers, and count the membership of social networking sites - and they will surely conclude that this has been the dawning of the age of interactivity. Never before have those with media and political power professed themselves to be so interested in our opinions; never before have we been able to pass on our thoughts so instantly to “friends” and “followers”, who may of course be total strangers. This isn’t simply a technological revolution. It is a cultural and emotional one, underpinned by a belief that constantly interacting with others is an inherently worthwhile activity. The owner of this year’s steepest adoption curve, Twitter, is interactivity in its purest form - “what I am doing now” condensed into a text message.

Ten years ago, when the internet was virtually steam-powered, the American academic John Durham Peters wrote a prophetic book called Speaking into the Air: A History of the Idea of Communication. Peters argued that the ideal of interactivity, the search for instantaneous contact with others, had a long and fraught history in western culture. He traced it back to St Augustine, for whom the epitome of perfect communication was the angel, a word derived from the Greek for “messenger”. Unlike us flawed mortals, who might be prone to heretical interpretations of the Bible if left to read it on our own and use our unreliable brains, angels could intuit the will of God directly and communicate it to others instantly.

The aim of modern media, Peters argued, has been to “mimic the angels by mechanical or electronic means”. In the 19th century new inventions like telegraphy, the telephone and the phonograph had a near-mystical aura. They were linked in the public mind with the Victorian vogue for mesmerism and telepathy, because they too seemed to fulfil the dream of angelic contact, of pure and direct communication, of breaking down the painful distance between self and other. “We are in great haste to construct a magnetic telegraph from Maine to Texas,” cautioned Henry Thoreau in Walden, “but Maine and Texas, it may be, have nothing to communicate.” We behaved, Thoreau wrote, “as if the main object were to talk fast and not to talk sensibly”. Today’s frantically texting, micro-blogging culture seems to be part of this long and futile search for shared consciousness. The boast of the social networking sites is that they will allow us to “stay connected” wherever we are, to defeat our tiresome physical and psychological distance from each other through technology.

It isn’t only in cyberspace. In real public spaces the people who run our lives are forever trying to converse with us, in a highly colloquial, intimate tone which has none of the formality we used to associate with official communications. The writer and humorist Paul Jennings once wrote about how angry his father used to get at the words printed on his ration book: “Your ration book”. “Whose do they suppose I think it is if it’s got my name on it?” he would say. These days he would be angry all the time - at those nagging dot-matrix display boards on motorways (“Have you got enough fuel?”), the sign at the head of the queue in my local bank that says “Nearly there: thanks for waiting”, and the faux-matey copy printed on crisp packets and smoothie bottles, saying things like “We think this flavour rocks” or “Once opened consume within four days or we’ll come round and get you”.

As someone who makes a living out of teaching and writing, I do find the idea of interactivity appealing. If only I could commune with others instantly, I would never again endure the pain of being unread, ignored or misunderstood. How I would love to be one of Star Trek’s Vulcans, those modern versions of Augustine’s angels who can meld their minds with others; then, instead of struggling over this article, I could simply tip the contents of my brain into yours.

But part of me also feels that there is something control-freakish about the desire for perfectly reciprocal communication. It takes too little account of human individuality and uniqueness. “Billions of consciousnesses silt history full, and every one of them the centre of the universe,” wrote the late John Updike in his memoirs. “What can we do in the face of this unthinkable truth but scream or take refuge in God?” We could spend our whole lives texting but there will always be part of us that is infinitely remote.

I wonder if one reason that so much discussion on the blogosphere deteriorates into the humourless taking and giving of offence is that people assume the words printed on the screen are aimed at them personally. In a culture which values interactivity, it makes a sort of sense to treat every form of communication like a text message. But not every public statement requires, or merits, a response. All language is a leap into the dark, with no certainty that we will ever be understood or even heard. Books get remaindered, blogs remain unread, and tweets fall on deaf ears. If it were easy to interact with others, no great literature would ever be written. Shakespeare’s sonnets are unsent letters, addressed to unnamed and shadowy people, or simply spoken into the air and to eternity.

I am not denying that online interaction brings pleasure and convenience to millions, and occasionally to me. What makes me uneasy is the cult of interactivity as an end in itself, the pursuit of better bandwidth as the route to a more liberated, democratic public sphere in which everyone will be instantly available to everyone else. In reality, as Peters argued, we only want that kind of intimate contact with family and friends. In more public contexts, such as the marketplace or the workplace, we often just want to be treated fairly and justly, the same as everyone else - which means impersonally and anonymously.

A proper public sphere is collectively owned and more than the sum total of lots of individual interactions. Why do so many of us love the strange poetry of the shipping forecast? Perhaps because it adheres to the literal sense of the word “broadcast”, which radio borrowed from the farmer’s term for scattering seeds over a wide surface. The shipping forecast is broadcast to millions of people who, since they are not on ships, are not its intended audience. For them it has become a comforting, collective ritual which simply forms part of what Ralph Waldo Emerson called the “cumulative intelligence of the universe”. It does not invite us to email or text our feedback; it does not care what any of us think as individuals. And so it belongs to us all.
Posted by Joe Moran at 18:34