The dullest map square in Britain 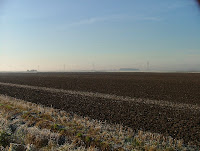 According to Mike Parker, author of the recent book Map Addict, the most boring 1x1km map square out of the 320,000 on the 1:50,000 Landranger series is SE 8322, just south of Ousefleet, between Goole and Hull. Here it is on the OS website:

‘On the map,’ Parker writes, ‘it contains absolutely nothing, save for a pylon line grazing one corner. In the flesh, it is one of those big-sky wildernesses that leave you feeling inches high, a land of ploughed black clods, mist and crows.’

I read quite a lot about maps for the book on roads, and ended up using hardly any of it. All maps betray the prejudices and blind spots of their creators. Early maps of uncharted territories were works of art and imagination as much as science, with drawings of monsters, dragons and pygmies substituting for topographical detail. Or as Jonathan Swift put: ‘So Geographers in Afric' maps / With savage pictures fill their gaps / And o’er uninhabitable downs / Place elephants for want of towns.’ Francis Galton (the man who devised the first weather map in The Times in 1875) also drew a beauty map of Britain which claimed to map the attractiveness of its female inhabitants. London contained the prettiest, Aberdeen the ugliest.

This has also put me in mind of the artist Richard Dedomenici’s work, ‘Nail Salon Belt’, which ‘discovers’ a nail salon belt surrounding London which is protecting its satellite towns from metropolitan encroachment:

And I also liked this visit to an imaginary place, Argleton, which you can find on Google maps but nowhere else:

http://walkinghometo50.wordpress.com/2009/02/22/destination-argleton-visiting-an-imaginary-place/
Posted by Joe Moran at 11:58