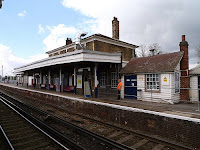 I don’t suppose this blog will ever have a zillionth of the clout of the Richard and Judy Book Club, but just in case my recommendations don’t fall on entirely stony ground … Richard Hoggart is mainly known for The Uses of Literacy (and perhaps being played by David Tennant in a TV dramatisation of the Lady Chatterley trial) and he’s not a particularly fashionable figure in academic cultural studies at the moment, probably because he writes a form of English that people might actually want to read even if they weren’t professionally obliged to. But I have got so much out of his books, particularly the three-part autobiography he published in the early 1990s and Townscape with Figures (1994), a portrait of his hometown of Farnham in Surrey. With ‘a bundle of literary, intellectual and social impulses’ he sets out to describe ‘the typical, the unique, the humdrum and the strange life of this small English town towards the end of the century’. Stefan Collini aptly called Townscape with Figures ‘a kind of Uses of Literacy for the garden-centre age’. There are some memorable descriptions of Argos, supermarkets and tribes of commuters waiting for the train into London. I liked the account of the young female office workers on a railway platform ‘stroking or turning their engagement rings like one-bead rosaries’, and the description of the easy listening LPs at Woolworth’s as ‘a concentrated musical soup-cube’.

Here are some selections from the later works of Hoggart.

On Margaret Thatcher: ‘She is in many ways my Aunt Ethel come back to life. I was brought up with, precisely, hauntingly, that shrill, nagging, over-insistent way of speaking, that bossy-pants way of walking, that remorseless insistence on always being right.’ (An Imagined Life, 1993)

A description of those video screens they used to have in post offices for advertising postal services: ‘While thus penned [in queuing channels] you are treated to a VDU display with running commentary on the virtues of this or that new Post Office service, or of someone’s photo-processing, or someone else’s cure for a few common ailments – backache in bed, say. Formerly nationalised services which have now been privatised, or made into executive agencies which have been ordered to act as if privatised and to develop aggressive commercial habits, drop their old sobriety and do promotional high-kicks – like a teetotaller who has been urged to take to the bottle for therapeutic purposes. By comparison, some of the shrewder large commercial concerns begin to look like church wardens.’ (Townscape with Figures, 1994)

On the phrase ‘a close-knit community’: ‘This is jargon-hiccup-speak. The word is now entirely threshed clear of substance, is a substitute for thought, a hidden assertion doing duty for direct examination and so a way of avoiding difficulties of definition and unwelcome perceptions.’ (Townscape with Figures)

On the phrase, ‘the chattering classes’: ‘It suggests rooks, magpies, starlings – chattering in the eaves – nattering away endlessly but weightlessly, very much for its own sake and for self-display. The phrase makes a harsh and philistine judgment but one sufficiently well aimed to be embarrassing. Not power without commitment, but talk – opinions, views, attitudes, postures – without commitment’ (The Way We Live Now, 1995)

I also liked the story he tells in The Way We Live Now to illustrate the casual class assumptions we make. A Glasgow comprehensive-school teacher asked her working-class pupils to write down the job they hoped to do. She misheard one boy’s ambition to be a ‘carpet layer’ – he actually said ‘corporate lawyer’.

PS There was a belated but belovely review of my book by Craig Brown in the Mail on Sunday but frustratingly I can’t seem to find it on t’internet. I feel a bit like a fisherman who caught a twenty-pound carp and forgot to take his camera. You’ll just have to take my word for it …
Posted by Joe Moran at 11:56