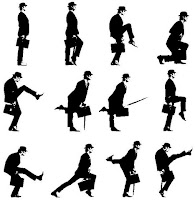 In Michael McCarthy’s new book Say Goodbye to the Cuckoo I found this account of his introduction to the culture of civil servants when, as environment correspondent for the Times in the late 1980s, he shadowed the Department of the Environment:

‘It was the language of the officials which really fascinated me. It was in effect a private code, which I thought of as “dynamic understatement”. It seemed to have arisen as a means of expressing strong disagreement between gentlemen without lapsing into incivility, so certain words which might appear anodyne became charged with sharper meaning. A good example would be “unhelpful”. This expressed dissatisfaction, irritation, even real anger, in the guise of a sort of rueful acceptance. I once left a senior official momentarily lost for words when he said to me, “That piece you wrote was unhelpful,” and I replied, “It wasn’t meant to be unhelpful. It was meant to be true.” It was as if, by being literal, I had switched languages.

This drawing the sting of expression extended to both praise and blame. I marvelled at the form of words used for the highest acclaim, which in the outside world would be “fantastic”, “tremendous”, “sensational”, “wonderful”, “world-beating”, whatever. In Whitehall it was: “rather impressive”. Once, and only once, I had “rather impressive” used of something I had written; I glowed for weeks afterwards. Conversely, the means of expressing the harshest criticism was similarly defanged: an action which the world at large might consider “catastrophic”, “terrible”, “appalling”, “disgusting”, “the pits”, would in Whitehall be termed “unfortunate”, or on very rare occasions indeed, “most unfortunate”. Again, once and only once, I saw “most unfortunate” used directly to an individual about his conduct, and it sent a chill down my spine: I never wanted it used of me.’

I must say I found McCarthy’s book quite impressive, if not indeed rather impressive. Something else I found rather impressive recently was Andrew Martin’s piece on pipesmoking in Granta: http://www.granta.com/Magazine/105/Among-the-Pipemen/Page-1. I’m not a great fan of jokes on the page. I like humour that is tinder dry and elegant and that emerges organically out of the style and tone. As anyone who used to read Martin’s column in the New Statesman will know, he is the master at this.

And while we’re on the same riff, it’s raining here and the summer is nearly over. It’s all rather … unhelpful.

Mundane quote for the day: ‘When we were young … his poetry was the poetry of everyday life, of shop-windows, traffic policemen, ice-cream soda, lawn mowers, and an uneasy awareness of what the newsboys were shouting. In addition he displayed a sophisticated sentimentality about falling leaves and cigarette stubs: he could have written the words of “These Foolish Things”. We were grateful to him for having found a place in poetry for these properties.’ – Philip Larkin on Louis MacNeice
Posted by Joe Moran at 11:47