Paean to the pigeon 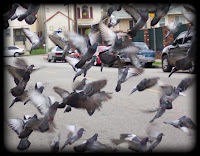 In case you didn’t read my piece ‘In defence of the everybird’ in the Guardian last week, here is a slightly longer version. And I don’t mean to get heavy or anything, but anyone who has any interest in the mundane – which I guess includes you if you’re reading this – is obliged, according to the bylaws of this blog, to like pigeons. Them’s the rules, I’m afraid. I don’t make them up.

IN DEFENCE OF THE EVERYBIRD

Now that two mayors of London have successfully rid Trafalgar Square of its pigeons, their policy is being rolled out across Britain. Hawks and falcons, in the employ of pest control firms, are scaring away pigeons in the Scottish Parliament Building, at Wimbledon, and in other city centres. These firms have a “no-kill” policy, but how this works in practice I am not sure. Training birds of prey not to kill pigeons sounds a bit like training crocodiles to tickle fish.

There is no doubt that overbreeding pigeons can be a nuisance en masse, and cleaning up their droppings is a costly chore. But there is a lot of hyperbole in anti-pigeon propaganda. They are blamed for carrying diseases like encephalitis, tuberculosis and psittacosis, but no one ever cites statistical probabilities: how many people have actually died from excessive contact with a pigeon? I suspect the war on pigeons is mainly to do with the trend for turning city centres into continental-style outdoor spaces with pavement cafes, piazzas and staged outdoor events. The messiness of nature must not be allowed to intrude into this well-managed, tourist-friendly urbanism.

The feral pigeon has long been maligned - even by birders, who prefer to trek to Cornwall or the Hebrides in search of rare, exotic breeds. Sadly, the great scholar and defender of the pigeon, the BBC wildlife presenter Eric Simms, died earlier this year. In his book The Public Life of the Street Pigeon, Simms painstakingly deciphered all the different pigeon coos, from distress calls to territorial signals, and showed how these savvy birds survived by scavenging on the tarmac and intuitively identifying soft-hearted humans to scrounge off. Simms won the Distinguished Flying Cross in the second world war, and his admiration for pigeons stemmed from their own distinguished flying record as part of the crew of Lancaster bombers, their job being to send word back to base if the plane was shot down.

All the great naturalists have been suspicious of the anthropomorphic pecking orders we impose on animals, and have found ecological worth in the ugliest of creatures. Darwin’s love of the unlovely earthworm is well-known; fewer people are aware that he also bred pigeons and crossed the Victorian social divide to fraternise with their largely working-class fanciers. To the untrained eye every pigeon is alike, but Darwin identified 228 varieties, many of them created by pigeon fanciers artificially selecting desirable traits and breeding from them – a speeded-up version of natural selection. Strangely, the crucial role of pigeons in developing the theory of evolution was written out of the Darwin bicentenary TV documentaries I saw earlier this year; for some reason, their producers preferred to send their presenters to look at the rare creatures on South Sea islands.

A lot of recent nature writing has followed Darwin’s lead in dealing with the mundane aspects of the natural world and has focused on tribal, unglamorous animals – Mark Cocker on crows, Laurent Keller and Elisabeth Gordon on ants and Bee Wilson on bees, for example. If there was a wildlife equivalent of Celebdaq, that virtual stock exchange in celebrity reputations, I would now be frantically buying shares in rooks. But I wouldn’t waste my money on pigeons. They will always be bottom of the bird FTSE, a perennially toxic brand.

Aside from pets, we seem to look down on animals that live cheek-by-jowl with us, or that remind us too much of ourselves. But that’s what I like about pigeons: they are the tamest wild animals in the world, the most comfortable with human routines. They fly around the tables in railway station cafes and loiter in the middle of roads, responding only sluggishly to car horns. They have even been known to make journeys on London Underground trains, and, according to a New Scientist article published in 1995, they are “travelling with intent” in a way that is “not necessarily motivated by hunger or ignorance” – which, strictly speaking, makes them fare dodgers. I think of them as the avian version of that 21st-century everyman, Homer Simpson. Like him, they are bird-brained, docile and not much to look at, but basically benign. Can’t we learn to live with them?
Posted by Joe Moran at 17:16