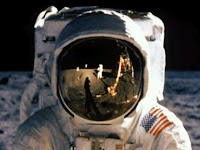 The sixteenth-century poet Edmund Spenser wondered, ‘what if within the moon's fair shining sphere, what if in every other star unseen, of other worlds he happily should hear?’ His near-contemporary Robert Burton shared this interest in ‘infinite habitable worlds’, but thought we could only ‘calculate their motions’ or visit them ‘in a poetical fiction, or a dream’.

My first memory is looking up at the moon with the little girl who used to live next door to us in Overton Crescent, Sale. That must have been in 1972 (I am now the same age as Neil Armstrong was in 1969) and so I suppose it’s possible that I was looking for the last man to walk on the moon (Gene Cernan), who left in December that year. But maybe that is a case of the wish being father to the thought.

I’ve been enjoying Andrew Smith’s book Moon Dust: In Search of the Men Who Fell to Earth, having watching his charming BBC4 documentary, Being Neil Armstrong, a couple of weeks ago. Lots of pages marked with post-its but here is my favourite:

There was also the joy of finding that the eye was so much more powerful without an atmosphere to cloud it … this was one of the reasons why lunar astronauts found the return journey so moving, with the Earth in their sights. Only twenty-four people have ever left Earth orbit and seen her from the perspective of Deep Space – all American and all between the Christmases of 1968 and 1972. The difference between near and far is enormous: the orbital astronaut experiences the planet as huge and majestic, while from afar it is tiny, beautiful, and shockingly alone.

It’s a cliché to say that the astronauts went to the moon and discovered the earth. But for the purposes of this blog on the everyday I loved the account of the post-lunar life of Alan Bean, the one who became a moon artist. He says he just sat in a shopping mall for hours when he returned to earth, eating ice-cream and watching the shoppers walk by, ‘enraptured’ by the simple fact of being human and alive.

PS I liked this email to the Guardian cricket blog after the first test (you need to be familiar with the rantings of a Norwegian commentator after a famous victory over the England football team in 1981): ‘Paul Hogan, Paul Keating, Skippy, Ned Kelly, Harold Bishop! Can you hear me Harold Bishop? Your boys took one hell of a draw!’

Mundane quote for the day: ‘There is nothing they won’t do to raise the standard of boredom.’ – Guy Debord
Posted by Joe Moran at 11:23