Tales of a new town 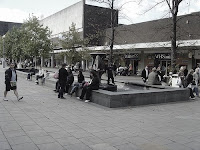 Liverpool’s Writing on the Wall Festival (http://www.writingonthewall.org.uk/) is holding an event in Skelmersdale on 20 May called Tales of a New Town, ‘an evening of poetry and prose and storytelling from the people of Skem which charts their experiences and celebrates living outside the city’. I’m interested in when these ‘new’ places acquire a history – a bathetic, weirdly unsettling history that evades the secure meanings of the heritage industry or the easy consolations of nostalgia. So here is a brief history of the new town in bullet points.

· ‘Basildon will become a city which people from all over the world will want to visit, where all classes of the community can meet freely together on equal terms and enjoy common cultural and recreational facilities. Basildon will not be a place that is ugly, grimy and full of paving stones like many large modern towns. It will be something which the people deserve; the best possible town that modern knowledge, commerce, science and civilisation can produce’ – Lewis Silkin, Minister of Planning, 1948 (what did he have against paving stones?)

· The Queen opened the new Stevenage town centre in April 1959. For several years afterwards its all-pedestrian shopping centre was one of the most photographed places in Britain.

· Milton Keynes’s famous ‘concrete cows’ (actually made of waste materials and fibreglass), which graze in a field beside the railway line at Bancroft, were donated to a local college in 1978 by Liz Leyh, a departing American artist-in-residence. These cows have assumed a mythological status which is quite disproportionate to their modest, makeshift origins. They have been beheaded, kidnapped by students, painted with zebra and pyjama stripes, daubed with obscene graffiti and mounted by homemade papier-mâché bulls. Although they were not officially commissioned, they have been widely misrepresented as a misguided attempt by the authorities to imbue the new town with a spuriously bucolic effect.

· ‘Here, in the new town, boredom is pregnant with desires, frustrated frenzies, unrealised possibilities. A magnificent life is waiting just around the corner, and far, far away. It is waiting like the cake is waiting when there’s butter, milk, flour and sugar. This is the realm of freedom. It is an empty realm. Here man’s magnificent power over nature has left him alone with himself, powerless. It is the boredom of youth without a future.’ - Henri Lefebre, ‘Notes on the New Town’

· New towns came to be seen as stalled works-in-progress which had failed to live up to the ambitions of their planners because they phased development, so land was left vacant while the population caught up with the projections. It was this idea of Milton Keynes as a vast housing estate with few central amenities that contributed to its mythic reputation in the 1970s.

· Milton Keynes conducted famous poster campaigns in London in the early 1980s which drew on fears of economic recession (‘Your company could be the next to go – to Milton Keynes’) or which pictured the city as an idyll while describing problems more associated with the inner city (‘Bumper to Bumper in Milton Keynes’, ‘Inner city rot’, ‘Concrete jungle’ and ‘The East End’). It was the first new town to use television advertising. Its most famous commercial depicted a crowd of children releasing red balloons from Milton Keynes bowl and ended with the caption, ‘Wouldn’t it be nice if all cities were like Milton Keynes.’ The new towns seemed to specialize in promotional campaigns during these years: Basingstoke renamed itself Amazingstoke, and the Scottish town of Cumbernauld sponsored a television commercial which asked: ‘What’s it called? What’s it called? Cumbernauld!’

· New towns are often marginal seats. One of the most memorable images of the 1992 election was the sitting Conservative MP, David Amess, grinning manically as he was unexpectedly re-elected. On the BBC election night broadcast, the Labour spokesman, Frank Dobson, tried to put on a brave face by uttering the famous words: ‘I don’t think even in Basildon they think the world is built on Basildon.’

· Milton Keynes is famously laid out in an Americanized grid system of 1km squares, with the main roads (identified by the letters H or V, for horizontal or vertical, and a number) located along the gridlines, and distributor and access roads within the squares. In fact, the reality is more complex than the image: it is actually a ‘lazy grid’ that takes account of topographical features and the layout of already existing towns and villages. Milton Keynes’s road layout has been depicted as ‘LA, Bucks’, a maze of freeways in which the priorities of transit take precedence over habitation and community. A Christmas card on sale in the 1990s depicted three wise men in front of a Milton Keynes road sign, with one of them saying: ‘I am sure I saw a star somewhere.’ When the Japanese photographer Naoya Hatakeyama undertook a four-month residency in the town in 2001, he chose to photograph it as a blur through glass drenched with water, as if through a car window in the rain.

· The landscape feature most associated with new towns is the roundabout. In 2002, BB Print Digital, a company based in the Midlands new town of Redditch, produced a freebie calendar for its clients, Roundabouts of Redditch, which achieved unlikely cult status after being featured on a late-night Channel 4 talk show, V Graham Norton. Inundated with orders, the company went on to produce calendars of roundabouts in other new towns like Croydon, Swindon and, of course, Milton Keynes. The caption writers for the Milton Keynes 2004 calendar invited the viewer to laugh at their painstaking attention to roundabouts which were, by implication, all the same: the Bottledump roundabout was ‘quite a cutie’, the Denbigh Hall Drive roundabout a ‘cheeky little blighter’, and the Two Sisters roundabout ‘breathtaking’.

· When Wimbledon FC moved to Milton Keynes – they have since been renamed the MK Dons – the local newspaper encouraged fans on the terraces to chant ‘concrete cows, la la la’ and ‘we’ve got more roundabouts than you’. They were also urged to ‘moo’ their approval when Wimbledon scored. Unaccountably, this failed to catch on.
Posted by Joe Moran at 12:24