The Society for Unread Authors 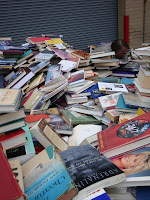 If you’re still reading this blog, all I can say is - thanks, as you seem to be part of a dwindling band. There was a flurry of interest at the start but those part-timers have long since departed, leaving the diehards behind, like some obscure religious sect who thought the world was going to end in 1975 but carry on believing out of loyalty and cussedness.

At the moment I’m feeling very … unread. It’s a bit like that episode of the Vicar of Dibley in which the confirmed bachelor and stalwart of the parish council comes out as gay on the local Dibley radio station, and is touched when his friends treat him exactly the same – except that, unbeknown to him, no one was listening. I could probably confess to murder on this blog and get away with it, because no one would be reading. Some people of my acquaintance have even complained that they were unable to access this blog because their computers froze or asked them for passwords. A likely story, told by the sort of people who used to accuse the dog of eating their homework.

In fact, I’m thinking of starting up a charity called the Society for Unread Authors. It would provide support and counselling to all those authors traumatised by not being able to acquire a readership. At this very moment there are thousands of authors wandering lost and confused around our cities, in search of readers. They are hunched in shop doorways, whispering forlornly at passers-by: ‘Spare the price … of a paperback?’

I gave most of the complimentary copies of my last book to friends and colleagues and I’m pretty sure most of them remained unread. It’s not great when you can’t even give your books away, is it? And don’t get me started on any of my other books. If you’ve read one of those, I probably know you. My dad once told me that writing a book is like dropping a stone down a very deep well. There might be a bit of rattling down the sides and a few years later you hear a tiny ‘plop’ as it hits the water – if you’re lucky.

Who is this mythical beast called a reader, where is s/he and how do you get hold of him or her? It’s lonely here with only the winking cursor for company. Maybe there aren’t any readers. Maybe everyone is writing blogs and just lies about things they have read, so we’re all just speaking into the air.

Please give generously to the Society for Unread Authors – by becoming a reader today.

Mundane quote for the day: ‘Every time I wash up a batch of crockery I marvel at the unimaginativeness of human beings who can travel under the sea and fly through the clouds, and yet have not known how to eliminate this sordid time-wasting drudgery from their daily lives.’ – George Orwell
Posted by Joe Moran at 19:44